WHERE YOU STAND WITH BARRY SWITZER

Share All sharing options for: WHERE YOU STAND WITH BARRY SWITZER

Never known to mince words, Barry Switzer decided to take the opportunity on morning radio today to call Johnny Manziel an "arrogant little prick." (He also said a lot of positive things about Manziel's abilities as a player, but come now since when do we just talk about whether NFL prospects can actually play football or not.) Seems pretty harsh, doesn't it? Only if you're not familiar with the unique terminology Switzer uses to describes people in his life: 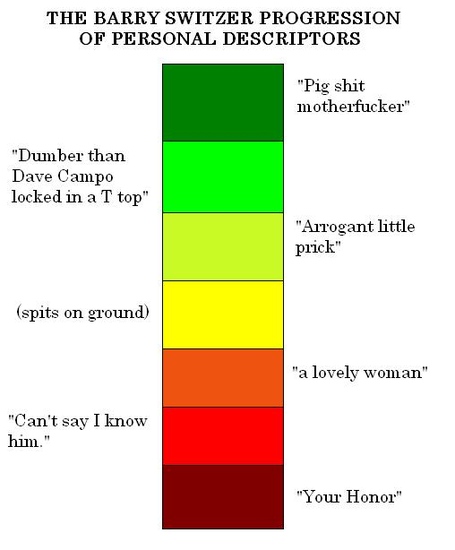 "Pigs shit motherfucker." The highest Switzer compliment, reserved for the closest of associates. If you are a pig shit motherfucker in Barry's eyes, he'll give you a kidney. It might not be his, but it'll work, mostly.

"Dumber than Dave Campo locked in a T top." Not in the most trusted circle, but just outside. The term also applies to grade school children in the community who bring home a particularly good report card. Just show up to Switzer's house, show him that A- you got in Social Studies, and receive an overly firm handshake and one of those little chocolates with Kahlua inside. This term of endearment came about after a real incident in 1997, when Campo found himself trapped inside a Trans-Am and eventually starved to death because of the child lock.

"Arrogant little prick." See, Johnny Manziel, it's not that bad. You're not at the top, but at this level Switzer likes you more than he doesn't. He just wants to get to know you a little better. Get a sense of who you are as a man. You a cop, for instance? Not that it's necessarily a problem if you are. Coach has plenty of good friends on the force. Good friends with quiet mouths. And nice boats.

(spits on ground). Precisely neutral, though Switzer doesn't usually stay here for long. This is just his holding spot while he gathers his initial impressions. The exception was in 1986, when Switzer met Treasury Secretary James Baker during a visit at the White House and the two spent an hour spitting on the floor of the Map Room. (This was not part of a visit by the '85 Sooners; Switzer just had a habit of putting on a wet suit and seeing how close he could get to the President without being caught. These were different times.)

"A lovely woman." Someone who Switzer feels slight antipathy towards, for reasons he himself may not even understand. This term isn't meant to indicate gender, however; Switzer understands that male and female are just societal constructs and there's no reason we can't all get into this steam room nude and see what happens.

"Can't say I know him." Extremely untrustworthy in Barry's eyes, so much so that he won't even comment about this person for fear they'll steal part of his soul. Barry Switzer's seen Beetlejuice, so he knows the power you can give people when you talk about them when they aren't around. You laugh, but are you willing to say Tom Osborne's name three times in a row in a dark room by yourself? Didn't think so.

"Your Honor." Watch your back, yo.