THE MORNING CONSTITUTIONAL: TEXAS BOUT TO TURN UP

Share All sharing options for: THE MORNING CONSTITUTIONAL: TEXAS BOUT TO TURN UP

Just look at that man. 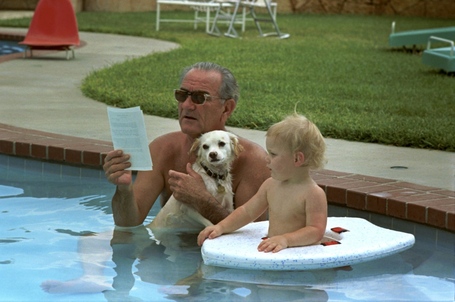 Damn right you bring him his memos to the poolside, son. And yeah, little Hammerfist Steerpuncher Johnson the 5th gets to read it with me, because he don't care about whether or not the Russkies are moving around some of their brokedick, can't-fly, rust-tampons of a nuclear missile force around Kazakhstan. No, Hammerfist ain't the baby, it's the damn dog, and he LOVES the pool, for what it's worth. Who's this baby? Why are babies just always rollin' up and wantin' to hang with ol' LBJ? I don't care if he's related or adorable, a vagrant is a vagrant. Call security, and tell 'em to bring more beer cause I can't drink the pool water and feel better about anything afterwards.

Now, look at him and imagine telling that man he can't drink a tall boy of Pearl Beer in the confines of DKR. Just imagine trying to do that to that man. You don't have to, both because LBJ is really, really dead, and because Texas is clearing the glorious path to selling beer in the stadium, and then probably creating a series of beer-themed recreational features: the Shiner Bock log flume, the Lone Star Kids' Splash 'n Play area. It's freedom, dammit, the kind of freedom you celebrate by reading sensitive national security documents in your pool while holding a dog, or by buying the $100 barrel of beer we know they're going to sell somewhere in that stadium.

Just try to stop 'em, you dumb son of a bitch, and see what happens next.*

*What happens next is Texas A&M trying to compete by installing hard liquor misters all around the new stadium. We really, really want this all to come true except for the part where Lubbock gets around being a dry county by putting LSD in all the concessions. Which they may or may not already do. It's hard to tell, because Lubbock.

CORRECTION: Lubbock is serving booze now, so thus everyone is twice as disoriented as before.