DABO SWINNEY IS ONE BIG BAG OF FLAMIN HOTS

Share All sharing options for: NICE NO/MEAN NO: DABO SWINNEY

RN: Nine wins, 16 losses. That's Dabo Swinney's record as a head coach against teams in the AP Top 25 at the time, and it is the simplest reason why Florida should not hire him. True, some of these losses were close, and some were in games where Clemson was not favored. But then there's the dispiriting loss to Georgia this year. Or the demolition by Florida State last year. Or the Orange Bowl that gave birth to a gloating billboard. 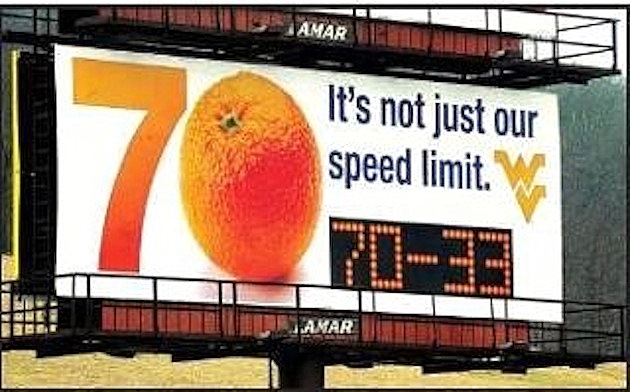 This year, the Gators will have finished the year having played three teams that were ranked heading into the game. Last year, they played four, and in 2012 they faced six. Swinney's track record in big games only inspires Outback Bowl levels of confidence, and that can't be what Gainesville is looking for right now.

SH: Dabo Swinney is skinny Phil Fulmer, a young Bill Stewart, or a much less well-read Lloyd Carr: an assistant who, through back-channel lobbying, player support, and sheer ballsy chutzpah, managed to talk his way into a head coaching gig before their departed boss's seat had cooled. You can either think of him as the world's luckiest former real estate agent, bouncing into a spot on Tommy Bowden's Clemson staff and on and upward until he accidentally ran the place, or you can think of him as kind of powerful house mold that's going to grow in the ventilation system whether you want him to or not. You want Dabo, you just wait until he shows up in the air ducts. He might have to fight Houston Nutt while he's up there. (Okay, he's definitely going to have to fight Houston Nutt while he's up there.)

After all, he's only got three ten win seasons in the last four years.

RN: Then there's the matter of how much you'd be paying for Swinney's services. Currently, only twenty coaches in college football make more than Dabo pulls in annually, and the reasonable assumption is that any offer designed to lure him away from Clemson has to include a raise. Even if you only bump him from the $3.175 million he makes now to $3.5 million, you're making Dabo the sixth-highest paid coach in the SEC and the most expensive coach in the SEC East. It's easy to say that money is no object at Florida, but if you're focused on improving facilities and getting excellent assistants, you have to make some careful choices about when and if you give this kind of cash to your head coach.

SH: Coaches aren't like cable. You don't have to buy them in bundles, and pay for TLC when all you want is a package of ESPN channels and various sports channels, maybe HBO, and then AMC for the final season of Mad Men AND THEN YOU'RE CUTTING THAT SHIT OFF FOREVER BECAUSE LOW WINTER SUN WAS BULLSHIT AND WE'RE STILL MAD ABOUT BEING MADE TO WATCH EVEN TEN MINUTES OF IT. Fuck you forever for doing that, AMC.

You don't have to get Swinney to get Chad Morris, or Brent Venables, or even the one thing Swinney's universally acknowledged to have been great at throughout his tenure at Clemson: recruiting. You can go hire those parts separately and go get someone you probably won't have to pay as much over in Arizona in the person of Todd Graham. Oh, and unlike Swinney, Graham's another coach with an iffy record against top 25 talent, but at least he's been consistent in that across multiple stops. Swinney's only known the world of Clemson, and if you think that's a representative slice of how things work in the football universe in general, you go ahead and let your chiropractor perform that appendectomy.

He's's only had 24 players drafted since 2010, which is...I mean, the most ever out of Clemson over any period, and all out of a relatively small talent pool, and, um...TLC sucks. HASN'T BEEN SHIT SINCE Y'ALL CANCELLED TRADING SPACES.

RN: Swinney likely brings with him Brent Venables as defensive coordinator and Chad Morris to run the offense, each of whom has previously been a finalist for the Broyles Award. Both are well paid. Both are also regularly linked to open coaching jobs. Whether Swinney can succeed without either, if they ever leave, is an open question. In the three years before Morris arrived, Clemson ranked 76th, 48th, and 90th in the nation in yards per play on offense; in the three seasons before Venables was hired, the Tigers went from 11th to 20th to 71st in yards per play allowed on defense. If Florida's hiring Swinney on the strength of his coordinators, only two outcomes seem possible. In the first, you're paying those coordinators more and more money to keep them from leaving. In the second, you're not able to keep them around and you find out if Dabo sinks or swims on his own the hard way.

SH: We've already had a coach who couldn't recover from the loss of valuable assistants, and another who couldn't ever hire the right ones to begin with, and why do you want to go reliving the disasters of the past? You say "Oh, he knows what he can't do," but miss on a couple of coordinator hires, and suddenly you're left with a babbling, incoherent, and stress-murdered shell of a man conducting funeral press conferences after you lose to Vanderbilt. Again. There are DVDs of the 2010 and 2013 Florida seasons available if you're stupid and like buying stupid things.

Then again, Dabo's made a successful offensive coordinator hire, and seems to like to score points. Would you eat slightly stale Flamin' Hots? You might if you were starving, even after you remembered they were just packaging peanuts covered with additives? Dabo is that bag of flamin' hots right now and I will be honest we are so starved he sounds a lot better than he should.

RN: Truthfully, Dabo Swinney wouldn't be the worst hire Florida could make. He's done an impressive job taking a program that was mired in mediocrity for over a decade and making it part of the national conversation at the highest level, even if his teams don't always live up to those expectations. But Jeremy Foley's goal isn't to avoid the worst hire. It's to make the best one possible.

SH: I give up. Pass the Flamin' Hots, whatever. Fuck standards. It's a meal, and that'd be more than we've had in a long time.