The Factor Five pops a Ritalin and prepares for a 10:30 kick.

Your bland statistical comparison really does favor Oregon. Arizona is slightly better at running the ball, and that should make sense after you remember Arizona's early slate included UNLV, UTSA (sad MEEP,) and Nevada. The Wildcats only conference game to this point was the clusterfuck, hell-for-first-downs, Hail Mary game against Cal. Arizona only ran for 107 yards against the Golden Bears, but either Cal is shockingly good against the run this year, or simply so bad offensive coordinators can't turn down free points through the air. It's confusing, but bear hold on and we'll get to something like a point here.

That point is: Arizona will have to run the ball to control the game in any upset bid, and may be pretty capable of doing that. That may not matter in the least thanks to Oregon being able to score with terrifying ease, especially when Marcus Mariota is completing over 74% of his passes, has 13 TDs and zero INTs on the year, and can scramble receivers open deep against coverage. So your average, kick-the-ball-just-shy-of-midnight witching hour race to 40, you say? Yes, exactly this for four hours, most likely with Oregon finishing with the last shot at the endzone.

p.s If Arizona QB Anu Solomon is 205 pounds then we're 185 and ripped like Jesus.

Wilbur the Wildcat first appeared at an Arizona football game on November 7, 1959. 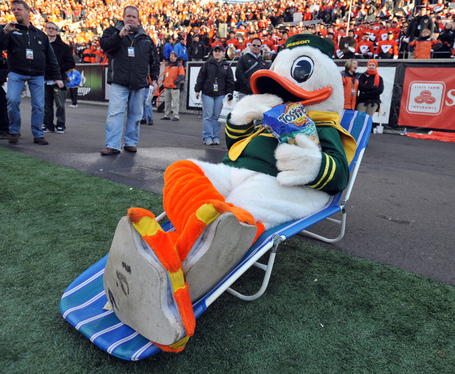 The costume has changed over the years from its original design, including a look in the 1970s that included a vest, blue jeans, and cowboy boots. 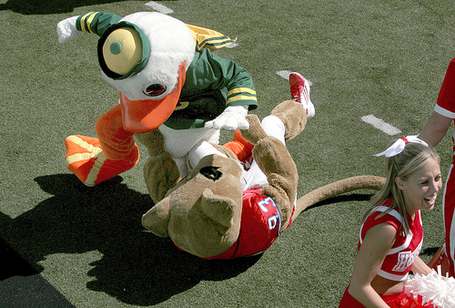 A female mascot, Wilma the Wildcat, was also added in 1986; the two renewed their vows on their 20th wedding anniversary against Arizona State. 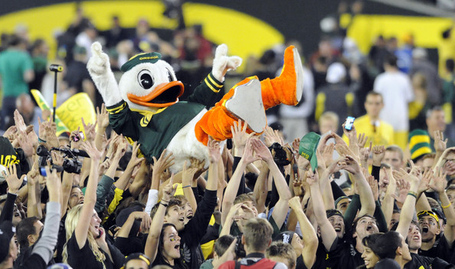 Truly, Wilbur and Wilma have added an exciting and spirited element to Arizona games, and we could not imagine Wildcat football without them.

Autzen's really, really loud, and if they're playing Outkast there's no chance of victory for Arizona because that's basically science at this point.

The Factor Five Five Factor Preview yawns, pops a Ritalin, and prepares for a 10:30 kick for Arizona/Oregon.

Honestly didn’t know which way to go with this until I realized that "Layth Friekh" could also be what a drunk Lou Holtz says to proposition someone at the club. And now I may never sleep again.

Oh, Oregon's shockingly due here after a 42-16 blindside upset in Tucson last year. Remember when Shaquille Richardson and Scooby Wright decided to play beach volleyball in the middle of a football game?

That came on the Ducks' first play from scrimmage, confirming our theory that if your first offensive play is a total disaster, then the rest of your evening is going to be a shambles, as well. Oregon gave up three turnovers in last year's loss and Mariota never looked right thanks to a knee injury he was playing through, and that's probably not going to be the case either way tonight. Revenge games not involving Stanford are kind of a novel thing for Oregon, so enjoy playing against type tonight, Ducks. That's how you get that Oscar nomination, and probably still lose to Nick Saban in a close vote because Nick Saban is the Meryl Streep of our coaching era. (Before you ask: yes, we'd take Streep over Will Muschamp because we've seen one try to play the role of a head coach for going on four years, and would certainly trust her to pull off the job better even if she didn't know what a midline read was.)

VERDICT: By a 5-0 blowout, Oregon is the Factor Five's choice as the winner tonight in a game we're going to go get some coffee to get through like, right now.