Presumably overjoyed over the prospect of Michigan beginning to have discussions about Dave Brandon not doing his job as Athletic Director anymore, he retired to the grass for the evening after consuming several units of alcohol. As a gentleman does.

GURLEY MAY BE SIGNED UP FOR HOME DUTY. Richt does not anticipate having Gurley available for this week due to his suspension following the incredibly stupid autograph story that resulted in his suspension, and our considering leaving the state of Georgia forever.

THIS WEEK IN FLORIDA FOOTBALL. Or Schadenfreude. Whatever, they're the same thing at this point. 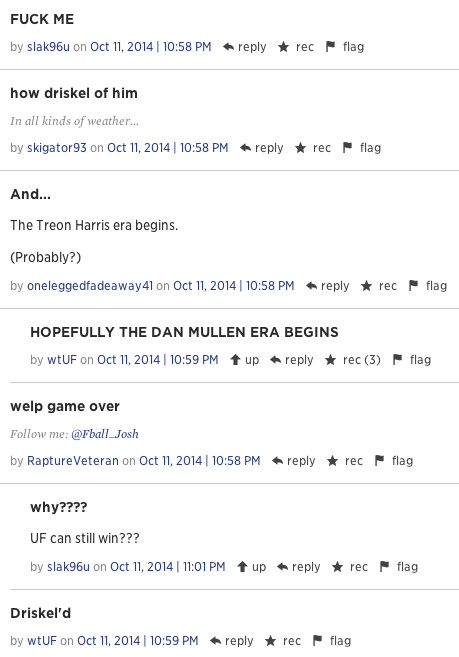 These of course are the most shortsighted of our fans who do not see Jeremy Foley's nine year plan, which involves Will Muschamp becoming consistently competitive for Outback Bowl slots sometime around the year 2021. You cretins aren't refined enough to see that, but that's why you're not Athletic Director or head coach. Some things just take time, like making a fine whiskey, or developing a properly arthritic joint.

THIS IS ALL TRUE. Dan Wetzel may have been the first person to accurately thread out exactly how we feel about the Jameis Winston case.

A HORSE'S ASS IS A SUPERB PIECE OF DECOR TO HAVE. Chris Petersen's office at Washington kind of looks like a TV news set, but it does have a horse's ass trophy in it, and that automatically rockets it to the top of all coaching office power rankings.

ETC: Breaking Madden this week is about trying until you get it right the 344th time. Oh, does this bar have weight on it? Damn, what national park has salmon cakes? Day three and you are still CVS BANGIN'.