IT'S TIME TO KEEP THIS WINNING STREAK GOING, VANDY

COME ON YOU HIRED WATSON BROWN THIS CAN'T BE WORSE

Share All sharing options for: IT'S TIME TO KEEP THIS WINNING STREAK GOING, VANDY

The moment arrives. Are you ready for it, Vandy? YOU ARE NOW. 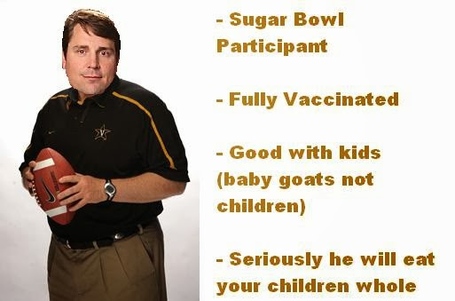 Vandy isn't just a job for anyone. It's a job for SOMEONE. Someone with legs, and arms. All of them, still attached to his stumpy body. It's a job that requires vision, a fully functional vision without cataracts or stigmatisms. You need a coach with bite, as in having all of their teeth, and someone who can walk a walk. Not the walk, but literally can walk with two mostly healthy legs.

(We acknowledge the accomplishments of Coach Dustbuster-strapped-to-a-skateboard, who went 6-34 at Vandy from 1984--1987.)

He's clean most days. He's so vaccinated, and his most recent tetanus shot came last week, and not at all because he keeps crawling into old refrigerators to sleep, even though decades of children's television warned him against this very thing!

You know that thing where someone buys a painting for $50 at a garage sale and then it later turns out to be a Renoir worth millions! Yeah, it's like that! Totally! Ground floor investment at basement-level prices. That's what we're talking about here, robber barons of the West End. Franklin's very name means money, but Muschamp's means "Field of flies" in Old French. Why? Because what he's got is sweet, and everyone wants to swarm over and get a taste. Maybe lay some eggs in what you've got and have their young in it. Flies, like Will Muschamp, are about program-building.

What's our point here? It's simple.

You can't know if Will Muschamp's belly is full of Faberge eggs until you buy him and get to cutting.

If you are interested in contacting Will Muschamp about the Vanderbilt vacancy, please tie a $50 bill to a chunk of raw meat and throw in the direction of Gainesville, Florida. He'll know what it means.