HAIL TO THE BEEF

With Celebrity Hot Tub, of course.

The discussion on Twitter yesterday demanded a full review of Presidents as edible meats. We have a few ground rules. First: we use the USDA's beef rating scale. Second, the standing President is exempted from the discussion, mostly because we do not want a call from the Secret Service. Third, we reserved the right to claim some Presidents weren't even meat at all. Fourth, we call dibs on Taft.

William Taft. Let's be clear: Taft was the Kobe of Presidentmeats, and a standard we shall never see again walking the paths of the Rose Garden. In a time when weighing over 200 pounds made one a Clydesdale, Taft ballooned to a richly fed and powerful 320 pounds at his peak. In modern numbers, Taft would have weighed seven thousand pounds, and had his own gravitational field surrounding him with a mini-constellation of junk mail and random street debris at all times. 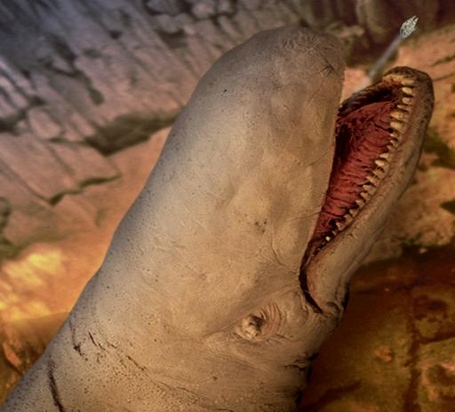 The possibilities are endless--the tomahawk steak cut on Taft alone would run you a hundred bucks in a quality steakhouse--but remember that the Comanche could live for three months on one Taft, and used every part of the Taft in their daily lives. Be respectful with this peerless beast, and the top grade meat it gave its life and Supreme Court seat up for to land on your plate.

William McKinley. The Gold Standard was not just a fiscal policy for McKinley, but a personal ethos. Believing that he should shed his body of all but its most essential elements, McKinley gradually had many of his organs and appendages removed until, at the time of his assassination, he was a skeleton-less, but succulent, sentient beef tenderloin. (In other words: THE FINAL FORM OF EVERY OHIOAN.)

Zachary Taylor. A bigger man, well-marbled and active enough to make for a good blend of fat and muscle. More importantly, Taylor's fondness for Louisiana cooking likely gave his meat a tinge of savory Creole spices and a natural immunity to malaria. Serve carne asada-style to Mexicans for maximum irony, or enjoy all by itself in any cut. A truly top-flight Presidentmeat.

Herbert Hoover. How a 220 pound man from Iowa who was resoundingly unpopular in the midst of the Great Depression wasn't publicly seized, coated with dry rub, and grilled is a mystery that scholars still can't unravel. People ate literally anything in the 20s, including barrels with POISON written on them in comically large font.

Chester A. Arthur. A well-marbled and well-maintained 220 pounds fed on gout-inducing banquets, you want to make sure you get your Chester A. Arthur only after it's matured into its full adult body. Ample jowls make for some of the best Presidentmeat guanciale around.

James Madison. The smallest president at a teensy 5' 4" and 122 pounds, Madison is the executive branch's game hen - it must be tasty because it's so expensive, but in reality you're just like "fuck how many bones does this thing have?"

Bill Clinton. Leftover Popeye's chicken that you sneak into the kitchen to eat in the middle of the night because fuck what that doctor said salad is joyless. This is not a metaphor.

Gerald Ford: HELLO I AM GERALD FORD AND I LIKE FOOTBALL AND HIGH FIVES AND PLUTO THE DOG BUT NOT THE PLANET THIS IS A FUNNY BATHTUB YOU PUT ME IN AND IT IS VERY WARM I HAVE NEVER HAD A BATHTUB FULL OF ONIONS AND BEEF STOCK BEFORE BUT IF MY MOM SAYS IT'S OKAY THEN IT'S OKAY GOSH IT IS REALLY GETTING WARMER NOW WELL NOW I AM STEW

John Adams. Described as small but "well-knit," Adams was basically like a suckling feral pig raised on oceans of hard cider and beer. Too small and un-marbled to be Prime, mind you, but certainly good solid winter ham material. For best results, put one of John Adams's legs in a pot with some greens, smashed garlic, and some chicken broth. Now let it simmer all day, low and slow like the little man himself.

James Monroe. Big farm-fed slabby beef, basically, so treat him like a cheaper Prime Rib. The Family Pak of Presidentmeat, for use at second weddings and lesser banquets only.

Martin Van Buren. First president from New York; also the first president who was not a man but actually just a slab of salted venison Jackson kept hidden inside an overcoat and called "Vice President." (The wig was for laughs.)

Andrew Johnson. The first President to be impeached. In their haste, historians often fail to note that he was also cured with apples and lemons. Savory country eatin' untainted by literacy or antibiotics.

George Washington. Certainly organically raised and thus high quality, but too lean to make Choice. Dental problems should give you pause, though. Losing adult teeth on the regular is a sign of being too turnt.

Richard Nixon. Oh, you criticize him for his anti-Semitic comments on tape, but how would you feel if you were the first president made completely from blood sausage? You have no idea how cruel Talmudic scholars were to young Richard "Treif-ling" Nixon.

Thomas Jefferson. Our nation's first gourmand-in-chief ate practically everything, so like most relentless omnivores his flesh was probably either a.) oily and tough like a bear's, or b.) tasted like a river silt sandwich like that of a giant catfish. One of our best Presidentmeat prospects for frying in a heavy batter, since all man may be created equal but some simply lack the marbling to become anything but meat-fritter material.

Franklin Pierce. Cured just enough by years of intense drinking, Franklin Pierce makes fine enough jerky for a woodsman's lunch, and would be acceptable hamburgers in a pinch provided you had a grinder, and did not need the hamburgers to have a definitive moral standpoint on slavery.

Harry Truman. Not much meat for eating, but slap that bad boy and some herbs in a pot on low heat for four or five hours and you've got yourself a sassy, flavorful stock. (Strain carefully to remove bones and eyeglasses.)

Rutherford B. Hayes. Not bad eating, it's just that it takes forever to clean the beard off it during kitchen prep.

Warren G. Harding. Tasty, but nearly impossible to clean because of all the baggies of cocaine secreted away inside his body.

Jimmy Carter. Passable skirt-steak flavor, but watch your ass when you get near those teeth. Butchers have lost fingers thanks to underestimating the crushing power of those things.

Dwight D. Eisenhower. You don't get that fifth star on accident, and in Ike's case his unique ability to survive off his own fingernails was just what a resource-depleted Army needed. (Note: this is how Bugles were invented.) So, no, there's no meat here. But there's nutrition in a pinch, and that's how we're going to beat those Vichy sons-of-bitches.

John Quincy Adams. Lived on very little, so has to be one of our stringiest, stingiest selections. Probably like eating a cat, but not a feral cat. Also spent his life obsessed with the haters, which toughens the meat. (This is why Lil Kim can only be used as jerky.)

James K. Polk. Regular participation in underground Washington Stabbing Salons kept him lean and fit, but be sure to sort through his Presidentmeat very carefully after cooking, as it's full of broken-off blade tips. They're like extreme bay leaves.

Andrew Jackson. Old Hickory is the Presidentmeat that hunts you back. Thin. Mean. Riddled with lead, tuberculosis, and once coughed up a Spartan's helmet at the White House dinner table in the middle of calling Henry Clay a motherfucker. Andrew Jackson's sole advantage as Presidentmeat is that hatred, disease, and environmental conditions pre-cured him into living jerky. Drop a piece of Andrew Jackson on the floor, and he would clatter like gunmetal. Never spoils; also was never edible in the first place.

William Henry Harrison. Died after a month in office, so strictly sausage grade meat sold to countries without regulatory agencies or a concept of traceable corporate liability.

John Tyler. Well-fed on an organic diet, but not substantial eating. HOWEVER: did have 14 children by two different women, so would likely be prized for his aphrodisiac properties and hunted quickly to extinction by Chinese medicine vendors.

Millard Fillmore. Supported opening up the U.S. to new trade markets, secretly to find tonics and tinctures to enhance the lustrousness of his hair, which he prized more than "any political freedom man may seek to enjoy." Biohazard.

James Buchanan. Might be fine eating but for one thing; Buchanan's flesh was so alcohol-soaked that his very presence in a kitchen with open flame would be a screaming fire hazard.

He would get angry when the White House would only be stocked with small bottles of champagne. Every Sunday he'd go to a distillery to pick up a 10 GALLON jug of whiskey. He'd drink cognac... and up to two BOTTLES of other alcohol... every night.

Would make an excellent firestarter, however.

Abraham Lincoln. One time we read a travel guide to China that said hey, listen: you might see chicken on the menu, and you might want to order it, and you will. Then you'll get a chicken, and realize that every chicken in China outside of the coastal areas appears to have died of starvation. Abraham Lincoln is that rural Chinese chicken, and you should not eat him.

James Garfield. Was fond of squirrel soup, tea, and simple crackers, so his meat probably tasted like nursing homes smell.

Grover Cleveland. The chili meat of Presidents, and yes that is a joke about how you're going to see him in non-consecutive settings.

Franklin Delano Roosevelt. You'd think veal, and you'd be very, very wrong. In the Yalta variety pack of meats, the order is Churchill (rich, boozy,) Stalin (lean and mean, like horsemeat,) and then Roosevelt, a bologna-grade meat Subway would have difficulty slipping past inspectors without a giggle.

John F. Kennedy. The only meat the FDA classifies as a protein and amphetamine. Not to be consumed by pregnant women, small children, those who need to operate heavy machinery, or the elderly or immune-compromised.

Lyndon B. Johnson. Fun fact: is the only Presidentmeat mentioned in Fallout series of video games. A can of it gives the player "a five point bonus for lying about your war record" and "bunghole awareness." (Does cause you to lose three points of "not having your dick out in public," though.)

Theodore Roosevelt. Many think of Roosevelt as one of the most masculine figures to sit in the White House. But his years as an outdoorsman and conservationist hid a shocking secret: he developed the ability to photosynthesize, and was thus not made of meat at all.

Ronald Reagan. How much does 184 pounds of tapioca pudding cost? We don't know either, but it beat the Russkies with a smile and a shiny tie pin so maybe you should ask them, comrade.

George H.W. Bush. More of an immortal condiment than a meat, like mayonnaise that never goes bad and also invades Panama because it just feels like doing it.