YOU SHOULD ALL BE WINNERS SOMETIME IN THE SECOND QUARTER

Share All sharing options for: THE ORANGE BOWL BINGO CARD IS HERE 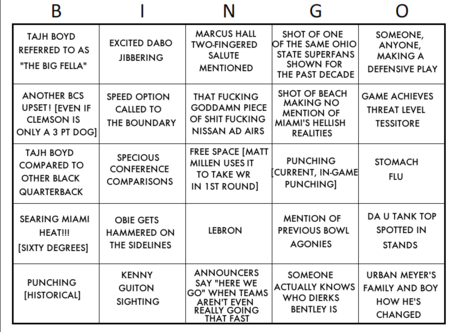 1. Tajh Boyd "big fella" is the polite way to point out that he, at like 9 percent body fat, is considered morbidly obese by quarterback standards.

2. Ohio State Superfans probably means "Buck-I-Guy," but could just as likely mean "Buckeye Boy," "Buckeye Girl," "Buckeye Debtor's Prisoner," "Buckeye Guildenstern," "Buckeye Not Allowed Within Five Hundred Feet of a School," "Buckeye Hound, the Dog We Smuggled In Because It's Miami and We Could," and "Buckeye Sapurmurat Niyazov."

3. "Speed option called to the boundary" is the worst imaginable thing in football and with two spread teams it is TOTALLY HAPPENING.

5. Two squares for punching: the historical, Charlie Bauman/Woody Hayes sort, and the tribute punching that could result between two teams angry their seasons didn't pan out the way they wanted. Especially Clemson. And now it's time to watch this again:

6. Buckeyes have been passing a stomach flu around, which is actually good preparation for the assault on the immune system that is Miami. Don't let them tell you any different.

7. Lebron means any mention, appearance, or reference to James. There will be multiple, and they will be connected to Ohio.

8. What the fuck is a Dierks Bentley and does he sing about trucks/girls/moonlight/alcohol? (Answer: yes.) BRING BACK ASHLEE SIMPSON DAMMIT.