THE MORNING CONSTITUTIONAL IS NOT A DOCTOR

NEITHER, IT SEEMS, IS KLIFF KINGSBURY

Share All sharing options for: THE MORNING CONSTITUTIONAL IS NOT A DOCTOR

Children are naturally curious, and much smarter than we give them credit for: 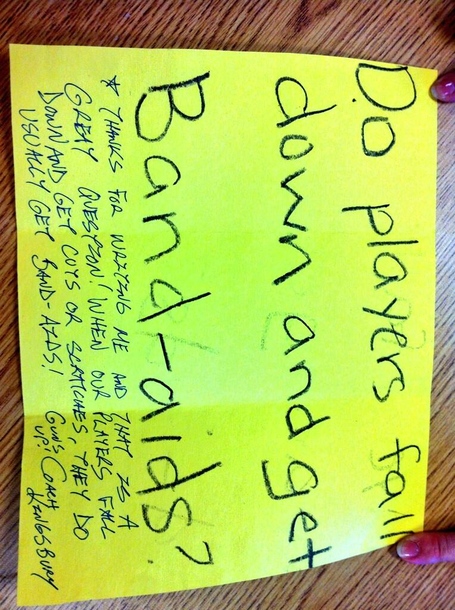 So when a Pre-K class wanted to know about Texas Tech's medical treatment policies, we can excuse them for not knowing the potential HIPAA issues that would present. Kingsbury's right - that is a good question, especially given the football program's previously challenged approaches to player health. (We miss you, Craig James, and we hope that you are doing well writing a sports column for a freely distributed pamphlet that warns of how water treatment plants are hastening the End of Days.)

Kingsbury's response, however, should give these children pause. Players who suffer cuts and scratches usually get Band-Aids? Doesn't that imply that there are players who need medical attention and aren't getting it? What are the criteria for receiving a Band-Aid? Are Band-Aids being given only to starters and key backups and not to players further down the roster? What about players who support the current lawsuit against the NCAA? Are they left on the field to bleed?

These kinds of policies for player health care are dangerous and infuriating. We hope that the children of this Pre-K class do not accept Kingsbury's woefully deficient response and demand that he appear before them for testimony and questioning, preferably after snack time.