THE MORNING CONSTITUTIONAL: DEMONS HAVE NO PLACE IN BAMA FOOTBALL

Share All sharing options for: THE MORNING CONSTITUTIONAL: DEMONS HAVE NO PLACE IN BAMA FOOTBALL

Is it just me or are some of the Grammy performances so far seem to be really demonic?? Looks like there is a lot of evil in the world..

AJ's right. There are demons in the world, and some of them were at the Grammys, because that's where evil chooses to reveal itself. Herself. Whatever form it takes, is what we're saying.

That's where it's going to reveal itself, and definitely not in the form of someone right under your nose, barely disguised as a human, relentless and unsleeping in the undeveloped wilds of our nation's sordid basement. It certainly wouldn't be that, because the Devil likes to advertise, and definitely wouldn't take a detour for Miami before deciding that Miami is too sketchy even for Satan himself.

NOPE. You pegged it, AJ. The devil's on your teevee, and is definitely not jumping into your arms. Alabama, why must you solve all the important mysteries of the universe, and leave none for the rest of us? The riddle of how to get toilet paper out of your trees, the difficulties of meeting new people, finding a way to say "I love you" with the gift of a military helicopter, or even the mysteries of weather. 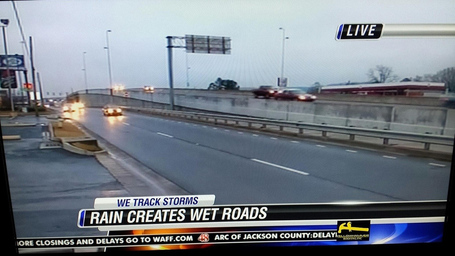 Leave something for the rest of us to do, Yellowhammer State. It's one thing to take the BCS as your personal fiefdom, but to take the national title in biochemical warfare research and open source ambulance dispatching, too? That is just the sin of gluttony, and thus totally the department of the devil that lives in Katy Perry's bustier, and who most definitely does not coach a football team in your state.