In the 1960s and 70s, the Russian government began assembling a team of highly trained operatives with one mission: to infiltrate American society, pose as solid, blue-collar citizens, and take over a college football program. It was a daring plan, and not without significant risk. For years, the agents lay in wait, ready for the signal from the KGB to launch.

The signal came in 1980. These are their stories. 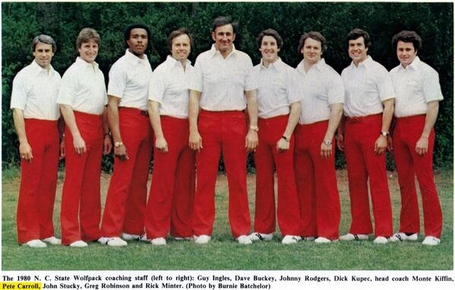 (click to enlarge, if you have the appropriate clearance)

GUY INGLES: Real name Nestor "Garrote Machine" Bezborodov. Developed an affinity for strangling victims with lengths of fly-fishing line, a technique he picked up in Nebraska from Tom Osborne, who was not working for the Americans or the Russians.

DAVE BUCKEY: Real name Grigory Saprykin. Twin brother "Don Buckey" was actually a crudely painted suit of armor stuffed full of radioactive material and explosives, which Saprykin intended to use as a dirty bomb until both were drafted by the New York Jets and Joe Namath destroyed the electrical systems by submersing them in an above-ground pool full of gin.

JOHNNY RODGERS: Real name Andrei Osinov. Had the unfortunate circumstance of sharing a codename with the 1972 Heisman Trophy winner for Nebraska, a Chinese-trained operative sent to destroy Chuck Fairbanks in order to unleash the PRC's greatest spy, Barry Switzer. Osinov eventually returned to Russia and spent his remaining years diagramming plays for Nikolai Ryzhkov, the secret coach of Illinois.

DICK KUPEC: Real name Ruslan "The Phantom of Minsk" Pogodin. Believed to be a double agent feeding intelligence to the American government through his contact Howard Schnellenberger, a CIA analyst who knew nothing about football...but everything about seduction.

MONTE KIFFIN: Real name Frankie Avalon. Pulled onto the team after the failure of Operation Beach Blanket Bloodshed, Avalon underwent minor cosmetic surgery and adopted a street orphan (named "Lane," after where Avalon found him) to take on his new identity. Complained repeatedly to his handlers about his assignment, insisting that the NC State offices had dozens, if not hundreds, of Lou Holtz skins from previous moltings. The KGB exiled him to the NFL for his failings.

PETE CARROLL: Real name Pete Carroll. Despite openly admitting, without even being asked, to being a Russian spy, no one ever believed Carroll. Conducted several shockingly public acts of sabotage, including destroying the Patriots, until he tired of never getting credit for his accomplishments in espionage, quit the program, and became one of the best football coaches alive.

JOHN STUCKY: Real name Pavel, last name unknown. Little has been confirmed about the man who posed as NC State's defensive line and strength coach; he is rumored to be hiding out in the Amazon rainforest, power cleaning trees for logging companies.

GREG ROBINSON: An early model of the Soviet espionage cyborg SPEK-NAZ ROBOTI 4. Powered by a nuclear reactor and a 1.023 MHZ processor with 64K of memory, the SPEK-NAZ ROBOTI 4 was designed to infiltrate the American homeland, analyze civil defenses, and then accept sabotage orders delivered to the unit via high-frequency burst microwave transmission. The unit was indestructible and remarkably human for a Mark 4 simulant, but its low processing wattage and faulty optical capability doomed it as a field operations tool. Agents lost contact with it sometime in the spring of 1997; its location is unknown, and a security matter due to the large amount of radiation thrown off by the powerful but leaky micro-reactor. Is blind.

RICK MINTER: Not an undercover operative, Minter was simply a man in need of cash to pay off old barber shop debts who had no idea that he was working with some of the Cold War's deadliest soldiers.