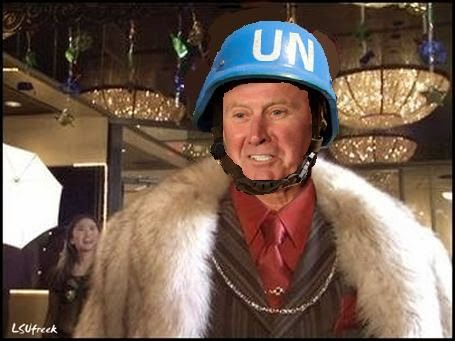 Access to clean water alone won't win you a national championship, but I think Haiti and Georgia can live with that.

On the topic of diplomatic immunity, let me say this: I still won't be sitting on a toilet at Bret Bielema's house.

I'm also gonna work my butt off to reestablish trade relations between Texas and Texas A&M. A TV channel broke this couple up, and a TV channel's gonna bring 'em back to together, thanks to this free one year subscription to Spice.

Looking forward to making some visits to Big Ten country. Already workin' on learning the language; "punt" is sort of like "aloha," since it means hello, goodbye, thank you, your real father abandoned us before you were born, hand soap, we'll get 'em in hockey season", extra dressing, and of course this isn't my first time.

Contrary to what you might have heard, I'm not gonna put any effort towards supporting a reunification of the Carolinas.

We're also gonna negotiate with the Irish government to get a whole season's worth of Notre Dame games over there. The early start times are perfect for fans here who wanna leave time in the day to yell at the neighbors for "doing ethnic things on my side of the property line."

I believe in humanitarian work, which is why I'm working hard to ensure Bob Davie receives food and water twice a day in accordance with UNHCR recommendations.

Not after midnight, of course. That's how you get scabies.

Furthermore, I believe in the right for children of all nations to live in a terror-free world. Ed Orgeron's gonna wear pants, all the time, everywhere he goes. And that's just how we're gonna do things from now on.

We're also gonna investigate that "body farm" over in Knoxville. How else do you match up these 5-7 seasons with all the fine recruiting work Lane Kiffin did?

I wanna make sure we're protecting intellectual property across state lines, too. Any ideas coming out of Alabama, for instance, had to be smuggled in, so we'll crack down on whoever's doin' that.

The BTN's just a huge scam for stealing cable. Mark my words.

We used to live in a world where a man accompanied by his man and his basset hound, and also perhaps a young and surprisingly attractive Sally Field, could not in fact bring a truck full of the banquet's only beer across state lines. Rest assured, that world is dead as long as I'm on duty.

Disputed territory's going to be a real challenge as well. Should Palestine be a state? Should Kentucky?

You wanna solve the immigration and obesity at the same time? Make Tennessee PICK THEIR OWN. MOON. PIES. Little fieldwork never kilt anyone.

The breakaway republic of Clemson? Never heard of it.

Animal cruelty's gonna be a key focus of mine as well. How can you just put a Brady Hoke out in the cold without a jacket? Terrible, y'all.

Offshoring is something that requires a lot of cooperation across borders, y'all. If he's so rich, we wanna know, and Stankonia's gonna have to work with us on Rich Homie Quan's tax status. That's just a fact.

And I don't care what kind of way Governor Dantonio feels about it.

Instead of building a wall between us and Mexico, let's focus on better flow across that border. Do you know how hard that thing is to scale, especially with a 24 pack of Bud Ice under your arm? Not easy.

Mike Price gnawed a hole in it for convenience. Man's got the teeth of a robot hamster.

It's also important to address vacuums of stable leadership worldwide. That's why we got you this electric collar, Arkansas State. Don't use it for se-dammit, you're already using it for sex stuff.

Conserving resources is also a major concern of mine, and that starts with recycling, so get ready for that Florida job, Dan Mullen!

(Dan Mullen's made entirely out of post-consumer products, in case you wondered about the smell.)

No one said trade had to be fair, NFL, so you enjoy Jim Caldwell, aight?

I think you'd be surprised to learn how many landmines are still out there. Dana Holgorsen's gotta learn a more mature way to end his romantic entanglements.

Auburn can keep spying all they want, Four towels and a hand over the mouth is all the counterintelligence you need to beat 'em.

We're takin' Nick Saban off the Designated Terrorist list, because anybody who loses to Oklahoma in a bowl game can't be a threat.

I wanna abide by the Geneva Convention, so Illinois football is canceled. Period.

Fearful of the West? Destined to collapse as an outdated relic? Ty Willingham? Sounds like the Playoff Committee's just the Warsaw Pact all over again.

We need to engage the Big 12. Doesn't do any good callin' them the Axis of Weevil like we used to.

Lemme close with this: peace is the goal, but Putin never lost to Georgia Southern.