The truth is this: at the end of last season, we were ready to retire the Spike Factor forever. It was an imperfect metric, rewarding teams like Georgia Tech who leaned heavily on the run and punishing Washington State for tilting more towards the throw (to be fair, it's not like the 2012 Cougars were any good at it). It also didn't have a large level of variance - nobody ever crossed the 60% threshold for a game. Most of all? It was a lot of work.

We'd resolved to leave the Spike Factor behind, an interesting memory of one season's offensive ineptitude. But then it hit us - the problem with the Spike Factor was that it should be an individual award, not a measurement of a team. If it's the quarterback who could just spike the ball instead of getting sacked for the sixth time, it's the quarterback who deserves our focus. Enjoy your team award from last year, Washington State, as there may never be another handed out.

With that all said, let's review the rules in case you're new to this. We calculate the Spike Factor as follows:

1. The denominator of this equation is the number of times the quarterback dropped back to pass or ended up running the ball, including sacks.

2. The numerator is the number of plays on which the offense would have been in as good or better a position if the QB had spiked the ball. That includes incomplete passes, passes for no gain or a loss, interceptions, sacks, runs for no gain or a loss, and quarterback fumbles lost on downs 1-3 (fumbles on 4th only count if the ball is recovered behind the line of scrimmage).

3. The numerator does NOT include spikes, kneeldowns to run out the clock, or fumbles lost after a successfully completed pass. We're putting a lot on the quarterback now already, and there's no reason to penalize him for the receiver's poor ball safety.

One last note before we dive in. We'll be running the numbers for every FBS quarterback this season, not just the AQ conferences, with one caveat: only the QB with the most attempts for his team in a game gets tracked that week. That means there is no Johnny Manziel or Clint Chelf in our Week 1 tabulation.

Despite Nebraska's defensive struggles, Taylor Martinez was his best self, only failing to gain yardage on seven of his 38 plays. Meanwhile, against a terrible FIU team, Maryland's C.J. Brown showed why the Terrapins may be a much more dangerous team this year, leading his team to an easy victory with a Spike Factor of just 17.65%.

But they both can't compare to - yes, you guessed it, Jameis Winson, who was nearly unstoppable leading Florida State's offensive throttling of Pitt. Winston was responsible for the ball on 35 plays, and on only six of them did he fail to advance the line of scrimmage. You, Jameis Winston, are just like the ocean under the moon.

The median Spike Factor for Week 1 was James Franklin's 38.64%, a number that was still better than 8 other SEC quarterbacks. If you don't think perfectly middling quarterback play can win in the SEC, may I remind you about Matt Flynn's Championship Ring?

Virginia Tech-Alabama might have already set the record for Spikiest Game of 2013. A.J. McCarron comes in 4th on our list with a Spike Factor of 62.96%, having failed to gain a single yard on 17 of his 27 plays. That performance, however, had nothing on Logan Thomas, who ran or threw on 31 occasions and only gained yards EIGHT TIMES. His Spike Factor of 74.19% is a testament to the power of NFL scouting.

We also give a tip of the hat to San Diego State's Adam Dingwell, who has the early lead on most total Spike Factor plays with 42. If you're how a bowl team can lose to an FCS squad that only went 7-5 last year, that. That is how. Special consideration also goes to Toledo's Terrance Owens, who finished with a Spike Factor of 61.9% because lololol Kirk Herbstreit says dumb shit.

These performances, putrescent though they were, couldn't snag Week 1's...

Our photo tool has dozens of pictures of FIU quarterback Jake Medlock. This is the first one. 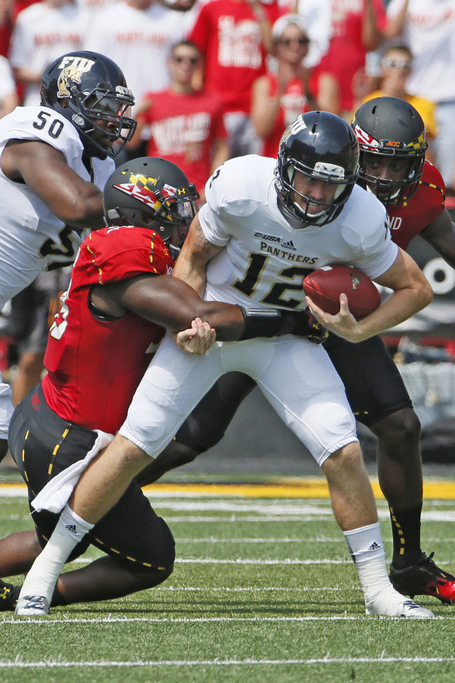 A fitting representation of our first Tetanus Spike recipient, who was responsible for 19 plays against Maryland and only managed positive yardage on four of them. Four. As in one per quarter. Ron Turner, you're already Ron Turnering the hell out of this year.