FEATURING A WINNER THIS AWARD WAS MADE FOR

I know, I know. We're doing talking about Week 4, the buffet that only offered you hot milk and mushy cucumbers. I promise we'll make this quick and make it worth your while at the end. (The spreadsheet, should you care to review it, is here.)

The contenders for this category in Week 4 played some extremely dodgy teams. Terrel Hunt (18.52% Spike Factor) throttled a Tulane team that somehow continues to exist, defying all economic logic. Nebraska didn't even play Taylor Martinez, letting Tommy Armstrong, Jr. (15%) tear up FCS South Dakota State. And Brett Hundley (12.9%) gets to say he beat the second best FBS team in New Mexico, which is a resume line that screams "sociopath."

None of them got to play an FCS team named after a Scottish tennis star, however, a unique privilege afforded to Bowling Green's Matt Johnson. Johnson picked up yardage on 24 of his 27 plays against Murray State, finishing with a Spike Factor of 11.11%.

This life ain't good enough, and neither is Murray State.

Median Spike Factor for Week 4 comes in at 40.35%, belonging to none other than POSSIBLE FIRST ROUND DRAFT PICK Logan Thomas. A middling Logan Thomas performance resulting in a narrow overtime win over Marshall tells us two things. One, that Virginia Tech defense is as good as it is overworked. Two, holy shit, there are no running backs on the Hokie roster worth a damn right now.

JUST A FEW INCOMPLETIONS AWAY

Week 4 was so boring that we didn't even have a single quarterback hit a Spike Factor of 70%. That's not because everyone was playing well, mind you. In FIU's case, for example, Ron Turner was clearly avoiding becoming the first team to have two Tetanus Spike winners, as E.J. Hilliard (Spike Factor of 64.29%) only threw nine passes in a game his team lost by 72 points. Right behind Hilliard was Chandler Whitmer, who failed to gain yards on 25 of his 39 plays (64.1%) and denied us the Michigan loss we so richly deserved. And we would be remiss to leave out West Virginia QB Ford Childress, who put up a Spike Factor of 65.38% in a game where the Mountaineers didn't sustain a drive longer than 20 yards until their last one of the game.

But they don't win the Tetanus Spike this week. You know who does? 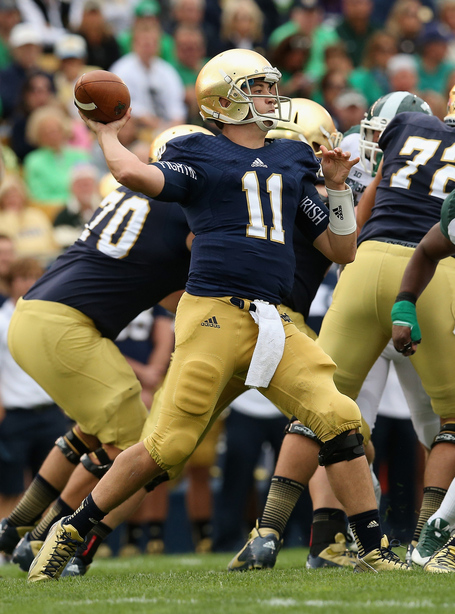 20 incompletions on 34 passes. 3 completions for no or negative yardage. No rushes, and no sacks, because Tommy is earning the hell out of this award, not letting you force it upon him, Spartan defensive line. His Spike Factor on the day was 67.65%, and he left the field the victor. That is what you lost to, Michigan State. Talk about bad penalty calls (rightly), but that is still what you lost to. You have to live with that.