THE SPIKE FACTOR IS AMONG ROYALTY, SUCKERS

The Spike Factor Master List now has 156 quarterbacks logged in the 2013 season, and, if nothing else, this project has been totally worthwhile because it's taught me one thing: New Mexico State has a quarterback named King Davis III.

Jameis Winston continued his stunning introduction to the college football world with a Spike Factor of 18.18% after Nevada proved to be little challenge. Minnesota slapped around an FCS opponent to move to 3-0, and Mitch Leidner's Spike Factor benefitted, finishing just under 15%. And Brendon Kay got a nice and easy transition from Munchie Legaux's backup to starter against Northwestern State, turning a Spike Factor of 11.76%.

None of these performances came close to winning the Carlos Santana Award this week, which goes to Boise State's Joe Southwick. Southwick ran or threw the ball 35 times against Air Force, and he only failed to gain yardage on two of those attempts. That's a Spike Factor of 5.71%, and I will be very surprised if anyone manages to beat it this season while throwing at least 10 passes.

Now watch Devin Gardner go 18/18 against UConn with no sacks. But until he does, you are our Spanish Harlem Mona Lisa, Joe Southwick.

This week's median Spike Factor of 38.99% falls squarely between two quarterbacks who went to high school in Texas. Right below that number is Kolton Browning, who marched into Wake Forest and walked away with a win, though that win has Jim Grobe's dead skin all over it. Above Browning? Case McCoy, who gave his team one pretty good half and one pretty crappy one and now will lose the starting job to Greg Robinson. There is no job in the state of Texas Greg Robinson can't do better. Look out, thoracic surgeons.

18 quarterbacks turned in a Spike Factor above 50% last week, including both starters in Kansas-Rice, Jake Heaps and Taylor McHargue. Even more statistically oddball? Both those quarterbacks finished with the same exact line - 39 plays, 22 spike plays, and a Spike Factor of 56.41%. There are some people who are tired of the "Charlie Weis Lost To A Starch" joke, so let's say this instead: the best college quarterback Weis has developed is Jimmy Clausen.

One other game featured two quarterbacks who had more spike plays than plays for a gain - Tulane-Louisiana Tech. Nick Montana (who was formerly courted by Weis) led the Green Wave to victory with a Spike Factor of 51.16%, while his counterpart, Scotty Young, burped out 19 spike plays on 29 attempts for a Factor of 65.52%. At this point, we can't even be mad at Skip Holtz. If you cast Gary Busey in your movie and then he eats all the boom mikes one night after shooting, that's on you for not seeing it coming.

This photo is not from the most recent Rutgers game, a 28-10 win over Eastern Michigan, but it's still fitting, and we'll explain why. 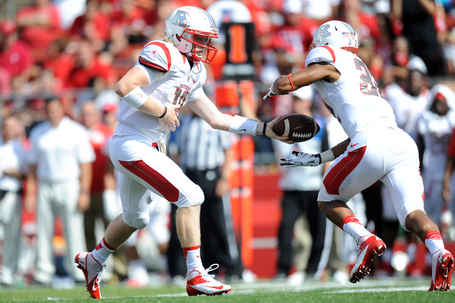 Chas Dodd threw 9 passes in this game and took 3 sacks. Dodd had one rushing attempt, but it was called back for an illegal forward pass. Rutgers did not ask Chas Dodd to do much other than hand the ball off, and he did that just fine. There is an inherent dilemma that comes with awarding the Tetanus Spike to a player who had so little to do in the game, but the fact remains: Chas Dodd, a senior quarterback who has started multiple games for Rutgers, was asked on 12 occasions to gain yardage against EMU and failed on nine of them, a Spike Factor of 75%. There may be a number of total plays too low to qualify for the Tetanus Spike, but 12 isn't it.