The Factor Five is back, and no just don't ask how things worked out in court for the Five Factor, okay? The Five Factor is home and that's all Five Factor wants to say about it.

Sample size before October is so outrageously limited that statistics serve almost no purpose here; Washington State's pass defense, for instance, is second in the nation on a yards per attempt basis, and if you think that's where they'll be in January, we would like to send you some literature about our financial investment services. But it's not the Factor Four Four Factor Preview, so we have to give you something.

Hedging out of the way, we'll point out that Clemson is one of only 16 FBS teams left that hasn't thrown an interception and NC State is one of only 14 that has yet to pick off a pass. We are aware they've each only played two games, but Clemson hasn't shied away from throwing the ball and the Wolfpack hasn't faced teams that relied on the run excessively. What we're saying is, if the first ingredient to an Upset Cake is "player on favored team does something he's not supposed to do," you may have to look to someone other than Tajh Boyd to provide it.

NC State is the only gender-equal mascot team in the ACC, having two mascots, one male (Mr. Wuf) and one female (Mrs. Wuf.) They are married and heterosexual, which is very important to some people in North Carolina. However, their marriage has been a sham for years, rife with infidelities, lies, and finally a catastrophic public affair so sordid it drove out a moderately successful coach. Mrs. Wuf remains on duty as mascot. Former coach Tom O'Brien has reconciled with his wife, and is an assistant at the University of Virginia.

NC State also has a live mascot, a Tamaskan dog named Tuffy who should be kind of lame because if you have three mascots, you really don't have one, but AWWWWW COME HERE LITTLE WOLF DOG LET ME FEED YOU SOME FRESH KITTEN CHUNKS AND okay we guess he's cool go get Tuffy some more kitten chunks. They're made of kitten. We don't know, go find an alley behind a sushi restaurant or something, cats are everywhere and they'll always make more, man.

Clemson, meanwhile, has this: 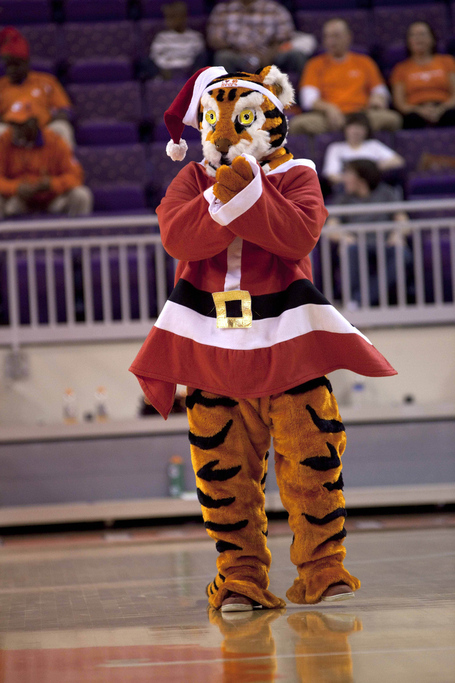 HEY HEY WHERE DID MY PANTS GO---

The first sponsor advertisement in NC State's Fan Guide to Carter-Finley Stadium is Triangle Rent A Car, which informs the reader that Triangle has muscle cars, pick-up trucks, SUVs, minivans, and 15-passenger vans. That forces us to ask - if people at the game are going to be interested in renting a car, how did they get to the stadium? Are NC State games full of hitchhikers and prison escapees? If so, don't you think Dabo Swinney will charm the hell out of them?

We'll give this round to NC State, because names like "Colton Stortz" don't often appear outside of a straight-to-DVD Jason Statham movie, but it's important that we all understand that Clemson can, in practice, have an All-Shaq Oklahoma Drill. SHAQLAHOMA.

None, really? It's not like the two teams have ever really played with anything serious on the line, nor enjoyed much parity as rivals. Clemson leads the series 51-28-1, including wins in eight of the last ten matchups. Even when NC State has properly upset Clemson, it's never been the throat-chop first loss on the season. NC State saves that pepper spray for Florida State, and that's pretty great, so let's arbitrarily award them something here for that hard and important work.

NC STATE, YOU'VE BEEN FACTOR'D! It's a 3-2 decision in favor of Clemson, but there's one variable even we can't account for...

WHIP THE CROWD INTO A FRENZY, POLEMASTER!