BO PELINI GETS A REPORT CARD

Share All sharing options for: BO PELINI GETS A REPORT CARD

The University of Nebraska has a pet problem, or at least it would if you blanked out all the names, and simply inserted "PET" into "BO PELINI" in any press release. It is one thing to issue a response to Bo Pelini's comments, released two years late, and in a tape made without his knowledge in a moment of extreme frustration. That is expected, to a degree.

But if you want someone to forget about it, or quell rumors, you don't do this.

We have observed, and many others have commented, that Coach Pelini’s demeanor has significantly improved since the time of this incident. Coach Pelini has given us his assurance that he understands the seriousness and inappropriateness of his comments. We believe he is sincere in his apology and in his regret. We are prepared to put the matter to rest. Our football student-athletes, coaches and staff deserve all of our support and we know the Nebraska faithful will be there for them.

That ugly thing that happened, that thing some people have forgotten about, is most definitely forgotten. We have just issued a statement to show you how much we forgot that thing, the thing we would like everyone to forget. That time when Bo Pelini said "Fuck you, fans, fuck all of you?" We're already moving on, as we will repeat in a statement tomorrow reminding you just how over this we really are. 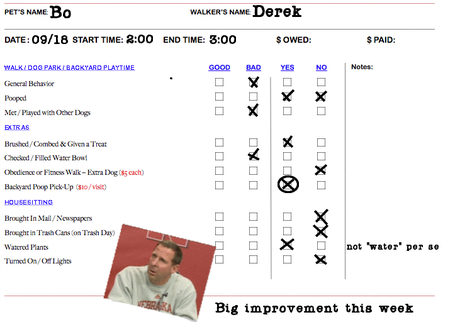 His eyes are bright, and his coat is shiny. He has finished two meals today (one cup wet food, and one cup dry just as prescribed by owner.) We anticipate him finishing another sometime around six o'clock. He has played well with other employees, and has been walked for a total of 45 minutes today. At playtime he behaved well, and received a liver treat for not biting another dog. His barking was loud. He slept for several hours, and probably dreamt of squirrels.

P.S. Nebraska, don't stop issuing statements. If possible, install a cam so Nebraska fans can watch him like owners checking in on their pets at doggie day care. An app for tracking Bo Pelini's mood, perhaps.

P.P.S. Hey, Deadspin would probably be interested in all these stories, actually.