A-BRILES CONTINUES TO DO THANGS. No college football weekend is worthless, at least not one where you get a rematch of Baylor and ULM, aka the team brave enough to try being the football nightmare of your Playstation dreams. Two quarterbacks on the field at the same time? Briles too turnt to care. 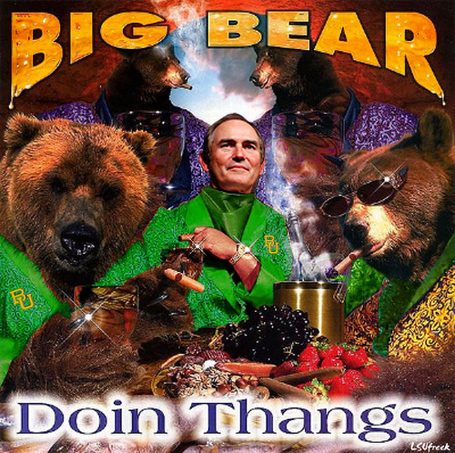 FUN THINGS FROM RADIO. You're all going to die, because Bo Pelini said on Bill King this morning that he thinks he knows who leaked the tape of him cursing the Nebraska fanbase. If you see him, don't bother playing dead. He will not lose interest. He will not stop until you are bloody ribbons left in the trees.

GAAHAHHHHHHHHHHH. DON'T CLICK ON THIS IT'S BEEN A BAD YEAR FOR USC ALREADY GIVE THEM A BREAK.

A CYCLONE ON THE PLAINS, INDEED.

Flipped to the replay of the Iowa-ISU game and these kids are totally smoking a bong in the student section. pic.twitter.com/GfbAOeGA5N

We don't think that's a bong, exactly. Maybe a one-hitter. Hell, it may be a cellphone. However, it's still important to note that you never get Cy on your own supply, stoners of America's heartland.

FINE, IT'S WEDNESDAY, WE'LL CRY A LITTLE. The Aggies did something phenomenal on Saturday for a cancer patient, and yes, it's firmly Rinaldi territory, and yes, it's still worth watching.

WELL, AT LEAST THEY MADE IT IN. BuzzFeed has a great piece on the high school game we were kicked out of in Miami.