SPOILERS JUST STOP YOU IDIOTS WHO CLICKED ON THIS WITHOUT LOOKING 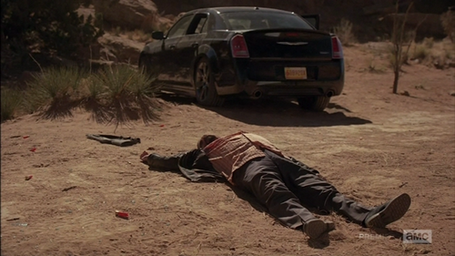 For those who thought all those bullets didn't hit anyone last week, and thus screamed about how unrealistic the firefight was, well...congrats? Breaking Bad has traditionally been all too happy to linger on the deaths of its characters: the slow strangulation of Krazy-8 with the bike lock in season one, the unbearable scene of Jane's death in season two, and even the lingering shot of a half-destroyed Gus Fring head at the end of season four all paused, at least, to take in the moment. Gomez is dead before the episode starts, and Hank is in the ground less than ten minutes later. It's a change of pace, but we're at that point where the desert starts eating everyone, and sand covers everything in sight.

2. You knew Hank was dead as soon as Marie opened up the garbage can and found the bloody remains of Hank's simulated headshot, but Hank wasn't far behind. He knew Jack was going to kill him from the start, and that's how you get to one of the episode's less obvious mirrors: Walt, crying in the same shot Gus Fring mourned his dead partner.

3. Why did Walt tell Jesse about Jane? I don't think it's a matter of simple spite, or confession, but a bit of both done in the act of burying Heisenberg. The desert is Heisenberg's birthplace, and that spot in particular is where Walt shed his pants, got naked, and turned into the meth devil incapable of telling the truth. That for me is why this is not a matter of pure spite: if this were Heisenberg talking, Jesse would not deserve honesty, but would be something manipulated with lies, poison, or force. This is the first act of Mr. Lambert, the horrible byproduct of the chemical reaction between Walter White and Heisenberg. Mr. Lambert is about clearing ledgers, burying bodies, and crawling out of the desert with new covers and blank tracks--something happening in this same scene. If Jesse's hurt by it, that's fine. But this is less Heisenberg stabbing Jesse one last time than Mr. Lambert veering into inhuman Dr. Manhattan territory, and erasing every trace of what he once was in service of creating his own galaxy.

4. Another bit of chemistry: in pulling barrels of cash out of the ground, Heisenberg has literally turned liquefied bodies in barrels into cash.

5. I laughed out loud at Walt rolling the barrel along to the Limeliters' "Times Are Getting Hard, Boys" both because it's a literal rolling out of the barrel for the worst party ever, and also because Meth Sisyphus walked right past the pants he lost in season one's opening RV cook scene.

I also laughed because Walt is clearly on some serious postmodern anti-hero imagery here: stuck in the desert, his bullet-riddled luxury car dead in the road behind him, cancer-riddled and pushing a barrel of blood money into a baffled Native American man's yard. That's how far the show has pushed you, the viewer: not only did it make you root for a psychopathic meth dealer for several years straight, and hate his wife for merely suggesting he not sell meth and kill people, it made this the funniest scene since Walt's roof pizza tantrum. (This, despite Hank getting his brains blown out just a few minutes prior, because Vince Gilligan is a nice man and a demented kidnapper of a storyteller.)

6. For some reason, with grotesque Walt shedding his skin and becoming something even stranger, I kept thinking about the final scenes in Cronenberg's The Fly, when Jeff Goldblum, beyond mutated and fully transformed into something horrible, decides that the best way forward through the hellscape he's about to call life would be to--why, yes! Let's jump in the teleporter and take the whole family along for the ride. You know, for togetherness. That's Walt here, his jaw falling off, obviously monstrous to everyone but himself, wondering why the family won't get in the truck with the thing trailing slime all over the carpet.

7. I've said it once, and I'll say it again: shooting is just business, but stabbing is passion. And if Skyler could have caught Walt running out of the house with the baby, she would have gutted him with that knife. Instead you get the part where we see that there is something even Mr. Lambert won't do: kidnap his own child, and take her away from her mother.

8. Koala Care AND the huge family-sized stall? Mr. Lambert is an abhorrent creature, but he picks only the nicest of bathrooms to change his daughter in. By the way, if you are a business and do not have a Koala Care in the men's bathroom then FUCK YOU. Changing kids' diapers helps Dad build up credit for future cash-ins like uninterrupted time watching football, and this robs us of that.

9. Purple is the color of confession in the Catholic tradition, if you're wondering why Marie is always surrounded by it. The scene where she breaks down Skyler in the office is one of four or five emotional terrors in "Ozymandias," particularly because you, the privileged viewer, know just how fleeting that moment of triumph really is. The church element has been there from the start for Hank and Marie, by the way: the purple, the sanctuary of their tiled, mission-style house, Hank brewing beer like a happy monk, Hank framed behind the confessional wire as Jesse refuses to talk to detectives. Marie, clad in black for most of the episode, is probably not done ministering yet, I think.

10. Oh, one other association with purple? It was the Victorian color of mourning.

11. Another long transaction paid off: Jesse threatening to start a fire in the White House in "Confessions," and the eventual appearance of the fire department at the end of this episode. We don't know what watching any of this is like for the childless, but Walt putting on one last performance for Skyler in order to leave the children with at least one un-jailed parent while coming apart at the seams did give Mr. Lambert back something like three cents of humanity. He got another few cents back when the lights in the fire station went on, and you realized there was something he could not do, and something left of humanity in him. (Or at least something that recognized he was no longer human enough to care for another living thing. That's different, but still significant.)

12. The show has gone so far into anarchy and the underworld and a place of utter desolation that seeing firefighters playing cards in the dark seemed hilarious to me--that anyone was on watch, and capable of rescuing someone else in the name of a greater good.

13. I have no idea where the show goes from here, or whether you can adequately top the burnoff from this episode. So much of the show is about building, mounting tension that finally setting the trap and watching it snap down on its quarry did seem...off. Or at least wrong, because for so long this show has lived in the realm of possible threat, and now is about the consequences, and the run into the grave for Mr. Lambert. How many other people slide there with him is the only question, and if you don't believe that check the array of headstone-like rocks framing him at the waiting point. (As they framed Jesse, who finished the episode a zombie, buried alive in a pit, his face distorted from violence, and chained to the meth trade.) Flash back to Walt watching Scarface, and openly wondering if everyone dies in this movie. There's a house to ruin yet--the one Skyler and the kids are sitting in at the end. Mr. Lambert is going to need an M-60. It's not something you use for baptisms and baby showers.

14. Jesse is on a leash, but won't be on it for long. The last thing you see in "Ozymandias" is a stray dog crossing the road, after all, as Mr. Lambert drives off into the sunset.