Spike Factor marches on with the results from Week 2, and our spreadsheet already has a host of players who logged numbers in Week 1 but don't appear on the most recent results. Some were on bye, but others - Braxton Miller, Adam Dingwell, Andrew Maxwell, and Tyler Russell, to name a few - missed the cut due to injury or poor performance that led to other quarterbacks getting the bulk of the playing time. Get it together, Andrew Maxwell. This thing was basically MADE for you to shine.

If there is a common theme to this week's contenders for Carlos Santana Player of the Week, it's this: overmatched teams are overmatched. It was not difficult for Cody Fajardo (17.24% Spike Factor) to torch UC Davis, or for Bryce Petty (16.67%) to stomp a Buffalo team that allowed over 20 yards per passing attempt, or for J.W. Walsh (15.63%) to rip the UT San Antonio secondary limb from limb.

That's not to say these performances aren't impressive, however. Beating a cupcake is one thing; doing it with near-perfect play is quite another, and if you don't believe me, ask Arizona's B.J. Denker, who saw his team win by 45 points but only managed a Spike Factor of 47.37%. I'm sure having a quarterback who goes 8/21 against UNLV won't hurt the Wildcats down the road.

But there can be only one player who convinces us to change our lives to better suit his mood, and this week that player is LSU's Zach Mettenberger, who was low man on the Spike Factor list with a score of 13.64%. UAB only forced Mettenberger into three plays that didn't gain any yardage, and it turns out UAB is maybe not the best at football. Best at dragon mascoting, though, for sure.

The median Spike Factor for Week 2 was 40% on the nose, a number shared by Nick Marshall, Casey Pachall, Nathan Scheelhaase, David Ash, and Connor Cook of Michigan State. Congratulations to you all on being perfectly middling.

Arizona's comfortable win makes more sense when you see that UNLV's quarterback, Nick Sherry, vomited up a Spike Factor of 67.86% against a Rich Rodriguez defense and no stop it you're the one laughing too much. Maxwell Smith was the highest on the Spike Factor list who walked away with a W, seeing only 10 of his 26 plays gain yardage (61.54% SF) against Miami-Ohio (EDIT: lol put in the wrong number. Smith had a totally respectable 34.78%, and the highest winner was actually Stephen Morris below). And UAB's Austin Brown very nearly gave us the perfect game of Spike Opposites, coming in second this week with a Spike Factor of 70.37%. We hope the lambs stop screaming one day, Austin.

(Because we hate ourselves, we'll also point out that Stephen Morris came in seventh this week with a Spike Factor of 55.17%. The Spike Factor: It Doesn't Give Extra Points For Blindingly Stupid Turnovers In A Close Game.) 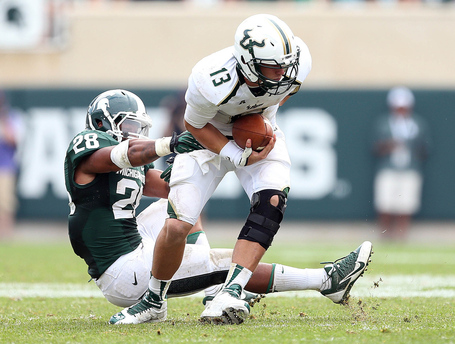 I honestly believed last week's Tetanus Spike score of 78.9 percent would be the highest we'd see all season - it's Week 1, so the rust would be at its highest, and good lord how can someone be worse than that and stay in the game? But I was wrong to doubt you, Bobby Eveld, and you have shamed me accordingly. Your Spike Factor of 80% against Michigan State both won the week and taught me a lesson about doubting others. Thank you for showing me the light.