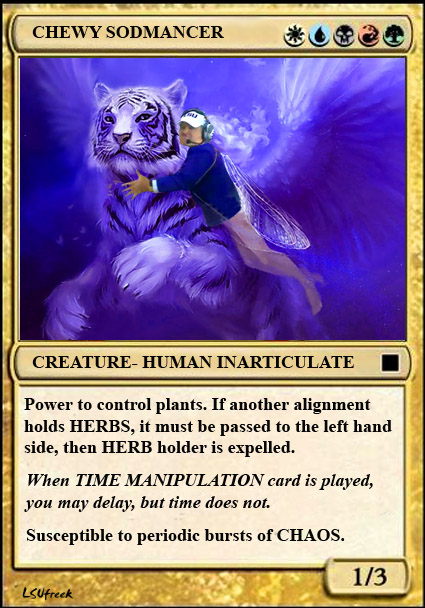 2005: He was wearing an Osteen. You know, the thin, wireless headset, the choice of the modern, hellfire-free televangelist, so tiny you might not even see it from a distance at a casual glance. This gave the impression he was muttering to himself much of the time on the sideline, an escapee from a mental institution who stole a size 8 1/2 white hat, floated atop his head, and then stole onto the field under cover of windbreaker. This was Tiger Stadium. It wouldn't have been the first time someone took the field at Tiger Stadium as an impostor and got away with it.

The Osteen would not be the choice for a typical SEC coach. That would be the giant plastic earmuffs favored by Bear-itarians like Jackie Sherrill, and anyone else who understood that a red-blooded American football coach used the same headset their grandfather used to call in artillery strikes on the Japanese on Peleliu. Those coaches wouldn't be caught dead in the slim Silicon Valley conference call headset. They would certainly not cough up a 21 point lead--TWENTY ONE POINTS--to Tennessee in the first home game since Hurricane Katrina.

Remember that. At the start, wearing the wrong hat and the wrong headset and up twenty-one points over a still-estimable Tennessee team at home, Les Miles performed his first act of self-immolation. The year concluded with another classic Miles pairing: another inexplicable loss in the SEC Championship game to Georgia, and then a turnaround brutality carnival against Miami in a 40-3 victory over Miami in the Peach Bowl highlighted by a brawl that knocked out a Miami player in the tunnel.

Oh, and in between those reversals, LSU had an 11 win season. Remember that, and how totally dangerous the man in the hat seemed to all around him--including, at times, his own team.

2007: Les Miles now no longer uses the Osteen, and rarely puts on a headset. He wasn't wearing one when they beat Florida in the best football game I have ever seen, the 28-24 victory over Florida in Baton Rouge where the sky caved in with the announcement of USC's loss to Stanford, and Miles gambled over and over again on fourth down and won. This being Les Miles reviewed from the comfort of the present, you knew what was coming. There would be  profligate losses to Arkansas and Kentucky, because teams built by Les Miles always got an entourage, blew the winnings on booze, lottery tickets, and an elaborate backyard water park. Then, the inevitable rebound, always against an unexpected opponent, and always just prior to losing the farm to the bank.

They shouldn't have been able to do that after their coach called an impromptu press conference, and angrily told a press to have a great day in one of the weirdest bits of sports theater ever broadcast.

They should not have been able to count on Erik Ainge throwing two interceptions to win the game for LSU. The Tigers would paint "HAVE A GREAT DAY" on the equipment truck the following year, because Les Miles stayed, won a national title, and completed a vicious butcher's run through three sacred cows of college football: that you go home when momma calls, that the Big Ten could claim equal footing in a title game even against something as uneven and schizoid as a two-loss SEC team with Gary Crowton at offensive coordinator, and that Phil Fulmer could win another SEC title, hold on at Tennessee, and stop the program's inexorable slide into the gutter. You always remember how improbable Les Miles can be; yet you forget how much of the course of common football history he's helped determine, and how many careers he's helped bury in the SEC West and beyond. Les Miles has helped define football reality. This won't help you sleep at night, but that doesn't keep it from being true.

2011: LSU would wander for a few years, flirting with outright mediocrity in 2008 and '09. Unlike someone like Phil Fulmer, Miles would not suffer in unspectacular fashion. No, he would botch clock management in excruciating fashion, watch the stands empty out before roaring back to beat Troy--Troy!!!-- in 2008, or lose to Penn State--a Big Ten team! like that was a possible thing!-- in 2009 in the Capital One Bowl. He would tie bizarre knots of verbiage about oil spills, appear on Sportscenter commercials, and appear on Twitter in all his garbled glory. 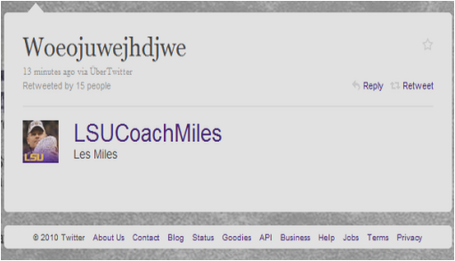 That Miles tweeting on accident and his actual speech seemed to be eerily similar got more comforting as LSU won, buoyed in large part by the constant funnel of recruits Miles kept coming in, and also by the hiring of John Chavis at defensive coordinator. The 2011 team may have been the least Milesian team of all: a team so dominant it seemed half-awake for most games, reclining atop money piles of three TD leads they were in no way capable of blowing. The only true Miles moment came against Alabama, when the Tigers decided the best way to play Alabama was to not play them at all, and simply punt their way to victory. Bo Schembechler approved of the game plan, and also of the grotesquely ugly 9-6 victory.

That steady dominance was the longest play-fake of the Les Miles Cosmic Constant. The undefeated Tigers would play a rematch against Alabama. They would lose thanks in part to Alabama's stifling defense, a stellar game by A.J. McCarron throwing the ball right at star CB Tyrann Mathieu, and the borderline deranged gameplanning that had Bobby Hebert openly haranguing Miles on the podium after the game. Consider the grandeur of that fall: that LSU had beaten everyone they faced, including Alabama, only to blow it all in one night against...that same Alabama team. Les Miles is one of the few people to have actually faced the video game situation of slaying the last boss, and then having to do it again. He did about as well as you do in those situations, and did not have the luxury of respawn.

A fortune of goodwill and karma went up in a single night of football. When you rob banks like Les Miles does, sometimes you leave with the money, and sometimes you blow up the whole vault in the process.

2013: The Les Miles era at LSU is now as old as the song "Hollaback Girl," and is longer than all but Mark Richt's in terms of standing SEC coaches. (He's tied with Spurrier, who came to South Carolina in 2005.) Unlike countless others, Miles has not only survived, but thrived while calling Nick Saban a neighbor in the league. If they were neighbors, Miles would wave, smile, and anger Saban by keeping his lawn in deplorable condition, but still winning the Christmas Lights Contest every year.

Last year was an average year for Les Miles: ten wins, three losses, and at least one moment in one of those losses that obliterated much of the patience and credit accrued in the ten wins. In the Chick-Fil-A Bowl, up 24-22 on Clemson and with the clock bleeding in the fourth, LSU passed three straight times. A punt, a quick drive down the field, and a field goal, and suddenly there's Les Miles again, a beacon with a white pillbox of a baseball cap on his head, as dangerous as ever in a situation involving time, the game, and the split-second use of probabilities in a high-pressure situation. There he is, on fire in the moment as always, and this time setting his whole team ablaze in the process.

They'll probably win ten games or so, again, as they've done for a decade, because for all the unpredictability there is one constant: rampant winning intermittently punctuated by losses so bungled or unexpected even Miles seems perplexed by their appearance. Every time Les Miles approaches the status of being a coaching institution, a landmark unto himself in the history of LSU football, a staircase collapses during a wedding procession, or a gargoyle falls off building and crushes an innocent bystander.

In the midst of all that is a coach who, eight years later, feels like he might as well still be taking the field wearing the wrong mike and coaching his first game. Most coaches attempt to be unpredictable in a measured way; Les Miles remains totally unchanged from the first day he started the job, and more baffling by degrees as the pressure rises.  Eighty-three wins later, and every LSU game still feels like an unhelmeted nude toboggan ride through an active forest fire.

Miles has the opposite problem of many long-tenured coaches. It's not that he seems too comfortable after all these years. It's that you, after so many hair-raising yet successful runs through the fire, can't ever get too comfortable with him, the faint smell of singed hair, and how close you get to the fire each time.