BROKEN AMBITIONS ARE COMING. LETTING THEM SPOIL YOUR DAY WOULD BE NONSENSE (UNLESS YOU'RE ALABAMA) 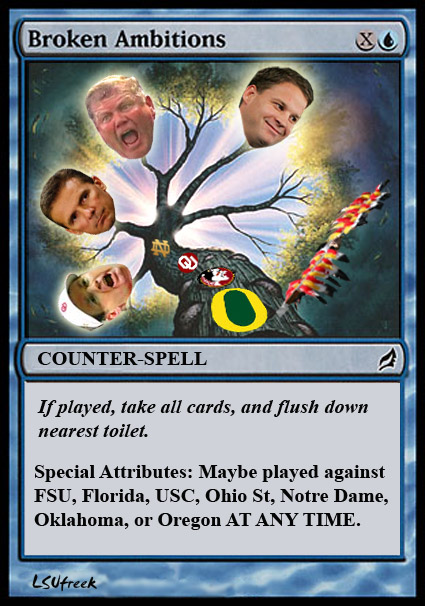 There are surely Ohio State fans who believe they'll win the national title this year. They also believed Ohio State would win a national title game with Joe Bauserman, just like there are Kentucky fans who believe the Wildcat football team can vie for a national title this year. They are out there: dug-in, licking the moisture off the top of their caves for hydration's sake, eating tin cans of the last victorious carcass they packed up, stored for later, and now stroke in the dark like talismans of a dark age. Somewhere a Minnesota fan in an ice cave mouths "Murray Warmath," thinks of 1960, and reaches for his knife when you ask how an 8-2 team could win a national title, much less one from the Big Ten.*

Preseason polls start the poison flowing. Florida State, Oklahoma, Florida, and Miami are too beautiful for their own good, at least poll-wise, with each school bombing out badly in the end versus their preseason poll numbers. Much of that is ghosting, or at least failing to recognize the glaring flaws in a team that bears little resemblance to the memory of better teams.

For instance: last year, a collection of people whose job it was to watch and evaluate college football were asked to choose a preseason number one. That group of people chose USC at number one in the AP Poll. The Trojans would lose the Sun Bowl to a team that lost by three touchdowns to Middle Tennessee State. To be fair, no one could have seen a thin depth chart, a disastrous run through a difficult Pac-12 schedule, and injuries derailing their season, save for this: this is what happens every single season in college football, and what will happen to some poor, miserable souls again in 2013.

Those miserable souls come from privileged corners of the football neighborhood. There are blue-collar aspirants to the champagne room who get tossed after a brief flirtation with success-- hellooooooo, Arizona ---and upstart trendspotting that turns out to be half-right at best. For the most part, these are outliers. The biggest disappointments are additive, and explode from an esteemed, well-regarded college football power in a period of decline ignoring a gas leak for years, and deciding that yes, a cigar would be a nice way to unwind on a fall evening, but no, it was definitely too cold to do it outdoors.*

*For Lloyd Carr it was a pipe in a study full of bound World War Two books, but you get the point here.

When the smoke clears, investigations usually reveal damage far less than expected. Gene Chizik may have had the greatest single collapse in college football history over three years following a BCS title, but Gene Chizik was and is a unique talent in the field of disaster facilitation. The bottom for some teams never really gets close to the real bottom, and if you doubt it look at Oklahoma's record under Bob Stoops for proof, since he's averaged ten wins over 14 years as head coach there, and yet catches a shit cyclone every time they lose a bowl game or drop one conference matchup. The crippling pea under the bed of Oklahoma fans is what a Baylor fan would sleep on happily, and what Alabama fans would at the moment consider nigh unbearable.*

*I'm not saying Alabama fans are irrational at this point for thinking they should win every game. For once, they may be right, and that says way more about Nick Saban at this point than their ability to properly gauge their team's capabilities.

So the answer to the question "What teams could be headed for disaster in 2013" is all about context, and always is. Mel Brooks said that "Tragedy is when I cut my finger. Comedy is when you walk into an open sewer and die." Two losses for Alabama would be total tragedy, a forfeiture of talent and potential that only malign gods could be blamed for. Two losses for Baylor would be fantastic, while two losses for Michigan would be evaluated strictly based on "who did we lose to, and did we do it tastefully, as a Michigan Man should?" One loss for Clemson would be fine, so long as that one loss does not come to South Carolina. If Kentucky lost four games this season Mark Stoops will begin sizing and preliminary work for a statue outside Commonwealth Stadium.

Disaster has a lot of different definitions, and all of them are contingent on a long string of events leading up to a definition of the present, and about what the future should be. Oregon is switching head coaches. Stanford is pulling further and further away from the legacy of Jim Harbaugh. Florida State is now fully a Jimbo Fisher production, while USC can still point to scholarship limitations and the depth chart and plausibly say "Listen, we can pay you next week, but until then it's gonna be tight, kids." Georgia, Oklahoma, Florida State, Notre Dame, and Florida all have mastered the game of making ten win seasons seem mundane, and even disappointing. Texas could be the sick man of college football Europe; Texas A&M could have overshot their potential by miles, and headed for a nasty market correction.

No one knows anything about LSU under Les Miles and no one ever will and that is science and you will have to deal with it.

That's not their fault. It's yours for being human, and thus weak and in need of expectations in the first place. (Also, what the hell are you doing trying to predict anything surrounding Les Miles.) Take weird-ass, perpetually unpredictable LSU. In 2007, they opened their season with a 45-0 erasure of Mississippi State so complete and bloody we thought LSU might not ever lose a game ever again on any field against any opponent. They horrified the casual viewer, but then again so did Mississippi State, albeit in an entirely different and opposite way.

They went on to lose to both Arkansas and Kentucky, and win a national title against-- yup --- America's salutatorian, Ohio State. None of this should have happened, but Jim Harbaugh dared to make Stanford a good football team. None of that should have happened, but in the course of world history even the smallest Hobbit can make a huge difference. By that "smallest Hobbit" we mean Pitt, and Dave Wannstedt, who deserves a special place in Pitt history for playing a special part in the most painful loss ever inflicted on West Virginia by their hated rival. Oh, that Mississippi State team went on to win eight games. No one knows how that happened, either.

This is a sport that still relies on a largely mythical notion of a championship batted around by the same 20 teams over and over again. Letting it--or whatever stupidities you assumed about a team prior to them ever actually playing a down-- madden you would be insane. Expectations are the fart that started on the ground floor, followed you into the elevator, and then carried you all the way up to your destination. They can and do ruin the whole ride. A team is what it will be: vague potential molded by deliberate form, and mangled or coddled by the whim of circumstance, fate, and blind luck. Ambitions are nice. They could be crushed, and will at the very least be altered, and the conditions of the contract with them renegotiated on the fly without warning.

None of that should interfere with watching Braxton Miller trace obscene shapes through defenses at lightspeed, or obscure the effortless flick of a Teddy Bridgewater pass through a tiny window of unguarded space. But it will, and when it does try to remember: for good or bad, you don't get a second chance to watch this, Washington State salvaging a horrendous season by beating Washington in the Apple Cup, or anything else thrilling and stupid in sports, for the first time.

It'd be a shame to let your loyalty to bad guesswork get in the way of any of that.