Share All sharing options for: ROUTE SIX AND SIX: THE ALABAMA BOWL CIRCUIT

Someday, you will be able to watch a full slate of bowl games WITHOUT EVER HAVING TO LEAVE THE STATE OF ALABAMA. We break down the ultimate road trip, a spin around Route 6-6, aka the best of all possible worlds...the great Alabama Bowl Circuit of the Near Future. 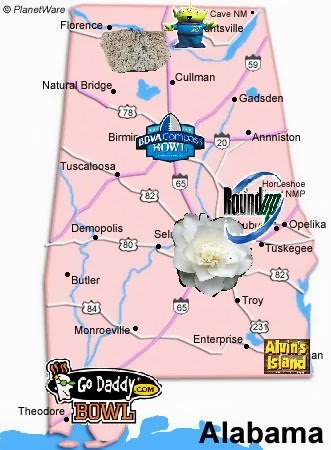 December 14th, 2014: THE ALABAMA SPACE BOWL. Fly into Birmingham International Airport, drive north on I-65, and take exit 25B into home of Route 6-6's first stop, the Alabama Space Bowl. Why are the rockets rusting? And why is Space Camp now an unlicensed day care center? Because it's not space, it's ALABAMA SPACE. (Alabama Space was created by Lot, and the stars are fragments of his salt-wife's body.)

(per the Alabama State Dept of Ed)

December 15th, 2014: THE DECATUR LIMESTONE BOWL. Played in the old quarry. Not the flooded one. That wouldn't make no sense.

Don't forget to see... The Pest Control Museum. Closed 12-4 on account of needing to feed Bess, The Termite Queen The Size Of A Mobile Home.

December 17th, 11:45 p.m. THE DADEVILLE ROUNDUP BOWL. Alabama's most scenic inland bowl is played by the shores of Lake Martin between the seventh ranked Sun Belt team and the runner up in the AFL American-North Division. Y'all can quit in the third quarter and just hit the lake if you want, because if the Tide ain't playin' that's exactly what Harvey Updyke's gonna be doing anyway.

Don't forget to see...the Lost City of Auburn, an abandoned suburb of Opelika located just a short drive outside Dadeville on the Georgia border. Admire the strange ruins dating back to the late nineteenth century, but be sure to leave before dark.

December 19th, 2014: THE BLU E-CIGARETTES CAMELLIA BOWL. The electric heart of Alabama gets a bowl sponsored by the electric heart of the e-cigarette product universe! It's fine by the NCAA and member schools because no one really knows what e-cigarettes actually are, including smokers. You could be smoking dryer lint for all you know. You're probably smoking dryer lint is what we're saying. Montgomery has a bowl game, and this is real, and there are no other comments necessary save this: Joe Schad is totally getting sent to cover this game.

Don't forget to see... HANK WILLIAMS DEATH CAR. THE CAR POSSESSED BY THE MURDEROUS GHOST OF HANK WILLIAMS, JR. IT IS SO LONESOME YOU COULD DIE.

Don't forget to see... Rat-eatin' frogs. They're somewhere on the road, but you'll have to find them yourself. If you don't do the legwork to see them, you probably didn't deserve to see them anyway.

Don't forget to see... The Racist Dogs Sculpture! Or the Ram-Devil reading to children.

January 5th, 2015: THE GODADDY BOWL. If you've made it to the sea, you've completed Route 6-6 and have arrived at the GoDaddy Bowl, America's only bowl where the winning team is awarded a derelict battleship. The festivities for the GoDaddy Bowl include a baffling revue of ladies in brightly colored hoop dresses. Do not peek under the dresses, as they are a front for smuggling exotic animals into the buses of the MAC team, and into the heartland for distribution to potential buyers You could be bitten by a coatimundi AND be forced to register as a sex offender, and simultaneously ruin the MAC's greatest source of steady cash. (Those sweet exotic animal sales dollars.)

Don't forget to see... The U.S.S. Drum, which proves that Alabamans can put ANYTHING up on blocks in their yard.