WHY'S IT SO HARD FOR EVERYONE ELSE TO BE AWESOME? 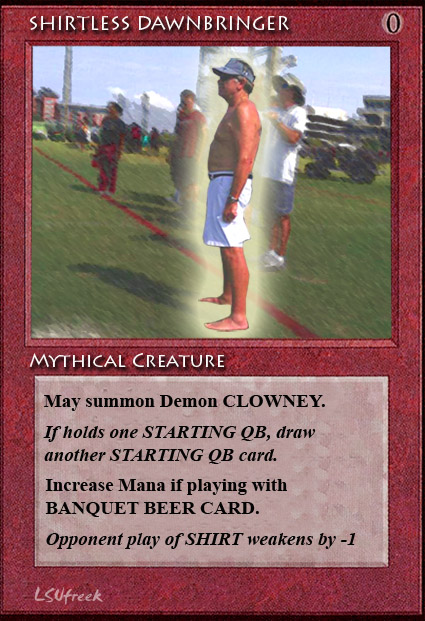 1. Steve Spurrier addressed the band at Florida every year. He thanked the band for what they did. He mentioned their importance in making The Swamp "a place where only Gators get out alive." He fiddled with his visor a bit, and was cheerful, diplomatic, and as smooth as Steve Spurrier can be when speaking in public, i.e. "not at all smooth in any way." It's not that he's uncomfortable with it, or even particularly bad at it. He tends to start-stop, moving over sentences like he's pushing a fast car with bad brakes over a line of hills, coming over the crest slowly on an "AAAAAaaaand..." and then rolling downhill in a pinched East Tennessean twang as he finishes. When he looked out at the band, he was saying everything correctly, and yet all I heard was:

Look at you. How'd you not figure this out? That football was the better way to go? Maybe you couldn't play. Hell, I'm lookin' at you. I'd take that tuba player as practice squad fullback. Yup, you, fattie. Run a 5.5 and we'll let you get knocked around a bit. See what comes loose.

Good lord. You colossal bunch of nerds. God bless you. I gotta go. Even the Ol' Ball Coach has to make a tee time or get bumped. Thank Jesus I was born sexy, good-looking, and a quarterback.

He meant that nicely, and also in the sense of someone beholding a giant pile of sweaty band dorks and thinking: what haven't y'all understood about how this all works yet? Is it so hard?

2. It's not hard to grasp the concept of a tonal language if you're used to listening to people like Steve Spurrier. This is what he said this week, verbatim, about several injured players after a South Carolina practice.

"We got a bunch of hurt guys that act like they’re really hurt," Spurrier said after Monday’s evening practice, the last of No. 7 South Carolina’s first two-a-day session. "Right now, they may not play."

On paper it's one thing, but the way he said it meant a whole other thing. Translated: I do not believe these very important players to our football team are truly hurt. I would like them to know there are people waiting for their jobs if they are only mildly hurt, and attempting to malinger. In addition, I feel deep disdain for them for even attempting such a ruse. All of this should be very clear to them.

Spurrier managed to say that using way, way fewer words than that, and all while not exactly saying it explicitly. A running theme in coaching is the ability to convey information in a very short, calculated burst of communication. Will Muschamp does it with concision and rage. Gary Patterson does it by taking his entire defense and cutting the field into zones, each with clear responsibilities and their own simple, easily deciphered calls. Mike Price at Washington State did it by building much of his offense around a single, repeatable sequence of plays. Say what you will about Jackie Sherrill, but cutting the testicles off a bull, while a clear case of animal cruelty, is very much a form of to-the-point communication.

3. Simplicity remains Spurrier's chief strength. It doesn't have to be that hard. When he came to South Carolina, he complained about the facilities, and wrangled with the administration over admissions. It sounded like bad politics initially, but bad politics turn in a hurry when you win, beat hated rivals, and bring in the kind of recruits you get with friendlier entry requirements and weight rooms dripping with fresh barbells and logo'd gear. Just give him what he wants, and you'll get what you want. In the meantime there's an open microphone, and an old smartass all too happy to bust out the razors on you. If you are in the way, you're getting cut, or at the very least pleasantly reminded of everything you are not doing to make Steve Spurrier's life simpler, and therefore easier for everyone.

4. The job, too, is uncomplicated. He no longer even recruits directly, farming that out to his staff. He still calls plays, but no longer butts his head against the limitations of his talent, and has happily used the zone read and shotgun formation for the better part of a decade with one of the slimmest playbooks in the game. This, after once scoffing that the shotgun formation was for teams that had trouble scoring points. Oh, and he really doesn't even have a formal playbook, but just concepts he works through different formations.

He still juggles quarterbacks, but no longer soul-eviscerates them for their failures as he did at Florida in the 1990s, and before that at Duke. He once made a throw in practice, under center and wearing his coach's whistle, that his QB Dave Brown thought was impossible. Spurrier then looked back at his QB Dave Brown and said "Well, I must be a better quarterback than you are." Spurrier couldn't do that now for a lot of reasons--he's gimpy, old, and who knows what lurks in his decimated shoulder joint--but one of them is a bit more time-earned diplomacy, at least in public. Spurrier now describes his quarterbacks not as "playin' pretty bad for a while there," but as "struggling mightily." His players are less disappointing teenagers breaking curfew, and now something more like toddlers caught playing with the light socket.

5. He would also take responsibility for those failures, and always did. Even at his evil heights, he blamed himself for Terry Dean's implosion, and again later on with Stephen Garcia. (That had its limits, and should have, because Stephen Garcia remains an enigma no man can fully understand or control.) He left Washington after working in a league and a place where things could not be simple, and was so burnt out by the experience he took an entire year off, a span of time that in coaching terms might as well be five years to a normal person. If you think he's over that whole experience, he is not.

You write it. Spurrier. YEP. THAT ONE, BUDDY. S-P-U-R-R-I-E-R. He may be older, but he still needs to keep his teeth sharp by using grudges like chew toys, even grudges that made him rich enough to play golf wherever he damn well pleases. A lot of spite can can kill you, but just the right amount will keep you alive forever, and standing on rickety knees shirtless at practice, lacking only a tallboy in one hand to complete the picture of a smug-ass redneck lawn lord.

6. And all of this is pretty simple, which is why--with zero irony whatsoever--Steve Spurrier said this year he didn't have a stressful job. He has a Jadeveon Clowney, but there's an entire two-deep stocked with all that recruiting loot his staff has brought to him. ("I hired those coaches, mind you.") He has two good quarterbacks, a line with the potential to keep them both upright. ("Gonna play 'em both, because they both deserve a chance.") He'll let the defensive staff figure out how to develop young linebackers, and then let some ballplays shake loose someone to replace Ace Sanders. ("Oh, we'll coach 'em up.") He has answers for all this, and probably played golf today, and tomorrow, and maybe a little during the week in-season if he can spare it. ("Nothing serious. Just a quick eighteen. Used the cart.") He's the best coach in South Carolina and Florida's history, is sixty-eight years old, and still happy. How's that so hard for anyone else? It doesn't have to be that hard, you poor, clueless bunch of nerds. Bless your hearts, but it just doesn't, at least not for Steve Spurrier, the Shirtless Dawnbringer of the SEC East.