THE FIGHTIN' MANZIELS OF SWINDLETOWN. Bubbaprog's long history of the Manziel family is the first thing you should read if you think Johnny Manziel gives a shit about anything that has to do with an autograph scandal. EAST TEXAS OIL MAFIA, STAND UP!

A MORATORIUM ON MACK BROWN JOKES IS DEMANDED. Kiehl Frazier, who started last year at Auburn and was the number one quarterback in the state coming out of high school, is moving to safety. That he's out of the QB race isn't a surprise--he ran behind Nick Marshall and Jeremy Johnson for much of camp--but the move to safety is odd, since one glance at Frazier in the pocket does not suggest obvious secondary skills. Nick Marshall, one of the frontrunners, is a former DB from UGA who was kicked off the team and ended up at Auburn. Auburn, more so than in other years, will be very, very weird this year. (And thus: interesting!) (And possibly tragicomic!) (And thus: interesting!)

WE COULD DO THE CHESNEY THING FOR 35 MINUTES. At the 33 minute mark of the BHGP podcast, we sort of lose control and start venting about Kenny Chesney, which someone has to do for the future of America and our children. Do not skip the intro, though, because it is Patrick Vint singing "Blurred Lines" with Iowa lyrics.

THE SHOCK OF PEOPLE NOT SHOWING UP FOR CASH GAMES AGAINST MEDIOCRE COMPETITION AT HOME. Stop scheduling Toledo and other cakes of the cup, and perhaps you can think about using guilt in a ticket sales push letter without us laughing, throwing the letter off the back of the trailer, and resuming our morning skeet shooting across the yard. (This is Atlanta. It's legal before 12:00 p.m. inside the city limits provided you use birdshot.)

OR JUST SAY WE CAN COME SEE THESE GUYS PLAY. Hey, look, recruits and stuff. You're not so bad, Big Dumb Will Muschamp Football.

WE GOT HURT GUYS WHO ARE ACTING REAL HURT. Spurrier, just talkin' shit about hurt dudes.

P.S. Clowney is totally playing, and Steve Spurrier is not new at this.

KEEP TRYING, WAZZU. Washington State is attempting to combat binge-drinking on campus and at football games. As a counterargument to these efforts, please see the image below 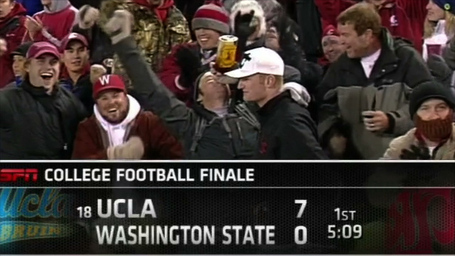 Washington State fans drain entire planes dry on road trips, and smuggle whole bottles of whiskey into the stands. Until you teach them how not to be Scandinavians and hardass Western high plains drinkers from birth, you might as well just offer oral rehydration salts in the stands and sell beer in the stadium to keep the input element of BAC lower than, say, smuggled bags of hooch tucked into their anoraks.

FIGHT! UCLA is feistier than any team with lacy cursive on their helmet need be.

.ETC: Pedal steel, motherfuckers. We have to get a drone strictly for recreational purposes. Don't ever make them do Murphy following a heavy squat day, because then this happens. MADE WITH PURE RUSSIAN BEAR.