THE SEXIEST ROOM IN WISCONSIN

ALL YOURS FOR LESS THAN A MILLION DOLLARS

Share All sharing options for: THE SEXIEST ROOM IN WISCONSIN

THE SHOWER OF POWER. 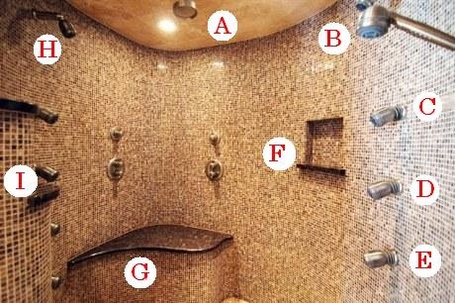 A) Overhead emergency shower that releases 38 gallons of water a minute for 10 minutes when activated. Fuckin' OSHA, man.

B) False shower head that is actually a studio-quality microphone. This is "Raspberry Beret" like you've never heard it before, mostly because Prince didn't fart during the whole bridge. (Ok, he did, but it was more artistic.)

F) Formerly a cashier's window staffed by a Ho-Chunk Gaming employee, it was bricked up after the Missing $500 Chip Incident of 2010, a case that's still discussed at many internal medicine conferences.

H) Probably not a webcam. Okay, not a really good webcam.