BUT WOULD LIKE TO TALK TO YOU ABOUT THE NEW WONDER DRUG, PROVASIC

Share All sharing options for: THE B1G MEDIA DAY DOES NOT CARE IF YOU KILLED YOUR WIFE 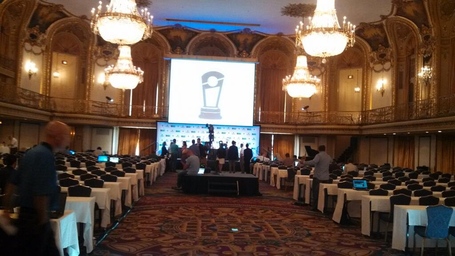 The Big Ten Media Days are currently underway in the extremely opulent, and so very B1G, Hilton Chicago ballroom, pictured above (photo via). Besides being a landmark of some note and current host of the Jim Delany press conference and variety hour, you may recognize the hotel as backdrop for the final scenes of the 1993 blockbuster, The Fugitive, where Dr. Richard Kimble confronts his former colleague, Dr. Charles Nichols, about his involvement in the plot that led to the murder of Kimble's wife by the illusive one-armed man. With that in mind, lets join the B1G Media Days already in progress... 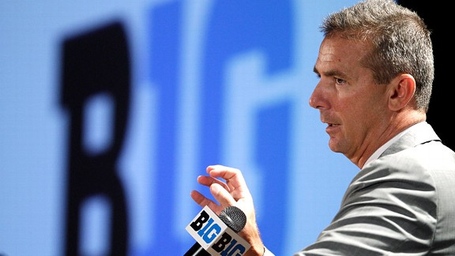 Urban Meyer: ...and I would especially like to thank my assistant coaches who helped me...

[A commotion is heard from the rear of the great ballroom. A disheveled-looking man with an unkempt beard and Hooters of Nashville t-shirt pushes past security and stunned onlookers and makes his way toward the podium and Urban Meyer]

[Meyer stops his speech, startled upon recognizing who is walking toward him]

[The crowd begins to realize who the man is too]

Richard Travis: After Henderson was arrested, you were the only one that had access to the incident reports.

Meyer: Reports? What are you sayi-

Travis: You switched the evidence and falsified the reports so Florida could make it to the Championship...and you're trying to do it again at Ohio State.

Meyer: Richard, I don't know what you're talking about!

Travis: I have a copy of the original arrest report...and some brand new hot WAG pics if you want to click on those...I know you're totally gonna like those.

[A flicker of concern (and arousal, because, who doesn't love WAG pics, BRO!) flashes across Meyer's face]

Travis: You almost pulled it off, Urban. But I know all about it now, and I can prove it...or at least get enough people to retweet it to lend validation to my claims.

Meyer: Ladies and gentlemen. My friend, as you can see, is obviously not well. Richard, if you want to talk...

[Meyer leaves the dais and heads toward the exit into a side room, with Travis following behind...passing the B1G commissioners table as they exit. Jim Delany is hiding under the table.]

[Travis enters the room and is immediately smashed with a large ESPN logo by Meyer. Travis goes flying. Meyer locks the door.]

Meyer: Your best quality, Richard, is that you don't give up. I mean, 6 straight tweets linking to the same mailbag, thats commitment, man.

[Meyer pulls Travis to his feet]

Meyer: Even when it's clearly in your best interest not to...

Meyer: I always knew I'd have to kill you.

[He drives a blow into Travis's stomach]

Meyer: Now, I must thank you for giving me a room full of witnesses today who will support me...when I tell them it was justifiable homicide.

[Meyer rears back with a rolled up file of NCAA violation reports from the Ohio State Athletic Department regarding potential University of Florida recruiting violations, ready to deliver the death blow, when a hand seemingly comes out of nowhere to stop him...]

Meyer: Let me do this, Tim. He's the last loose end. It's all over after this.

Tebow: You can't do this, Coach. Remember #6. Such violence is forbidden.

[Relief passes over Travis's face, thinking the threat of imminent death has abated...]

[Suddenly, Tim removes a pistol from his waistband and points it at Travis's head]

Travis: ...BUT IM THE #1 SPORTS RADIO SHOW HOST IN NASHVILLE AND PROBABLY BIRMINGHAM AND HAVE ALL OF THESE MOBILE PAGEVIEW STATISTICS! I ALSO HAVE A HOT CHEERLEADER WIFE!

[Tebow fires a single shot into the head of Travis, killing him instantly]