FRANK SOLICH NEVER TURNED DOWN A RACE. It is a good morning and will be a good day and then will ascend to greatness sometime between 11 a.m. and 1 p.m. because it all started with this:

There's video, too, because you really want to see that Frank Solich not only rides tricycles for charity, but gives 110% effort in the process. When you go 110% on a tricycle, you fall, and that's probably something else you want to see, and then make ABSOLUTELY NO JOKES ABOUT GHB WHATSOEVER. NONE AT ALL.

TEXAS DOES LIKE A RELAXING NAP FROM TIME TO TIME. When you look back at how the 2012 season unfolded, and how many people have said things like this about Texas, it makes the absolute annihilation of Ole Miss in Oxford seem even weirder in retrospect. We did just type that about an Ole Miss team. It was weird for us, too.

MAYBE HE MEANT A STACK OF CRAP, SINCE THAT'S ORDERLY? No, Charlie Weis meant a pile, as in an unordered and slovenly hunk of crap. He'll elaborate on it and everything for you, and even get players to agree with him. Charlie Weis has likely made more money than you will ever make, and life is funny like that sometimes.

ESSENTIAL COMMUNITY POLICING. We repeat: you don't have to make up reasons to arrest Florida football players, Alachua County Sheriff's Office, and you especially don't have to do it with Antonio Morrison, but releasing the tape and admitting it should have been a warning is at least a nice bit of transparency on their part. Someone please hug that cop, and then send him to Disney for a few days with money for the turkey legs in Fantasyland.

FOOTBALL CRAAAAACK. Nick Saban scouting his own team is delightful, particularly when you have him referring to everyone on the field with defensive terminology, and also when it's him politely pointing out how the went after Manti Te'o over and over again by design in that game.

DON'T LOOK AT THIS. CLICK CLACK SEVENTY'S THE NEW THIRTY 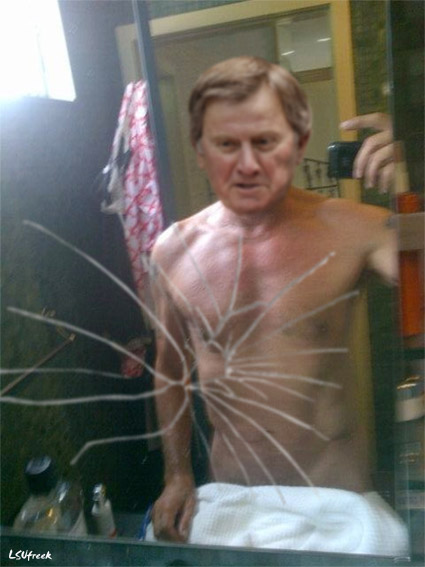 ETC: No, wait, really, Miley Cyrus really IS better without the music.