A WORD FROM BEAR, THE POLICE DOG

Share All sharing options for: A WORD FROM BEAR, THE POLICE DOG

Lesley Stahl: Thank you for being here today. 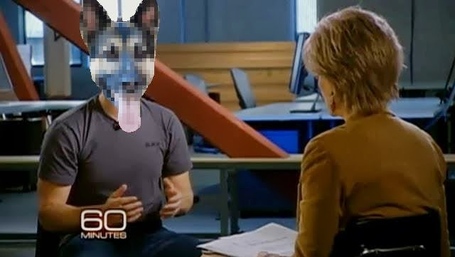 LS: So, how did this start?

Bear: We were working downtown. Mostly drunks. Occasional searches. You'd be surprised how many college kids don't even try to wrap weed in fabric softener.

Bear: I'm in the car. I don't like being in the car, mind you. But they keep me there. There's a lot of...challenges being a K-9 cop. The hours, the pay, the stress on your family. But the worst is the hierarchy. A human can total three cruisers in a year, but me? I don't even touch the keys, much less get behind the wheel.

LS: You're saying dogs are discriminated against in police departments?

Bear: I'm not saying it. It simply is. I don't even get pants.

LS: Do you want pants?

Bear: Oh, hell no. But yanno, health insurance? That'd be nice. My wife has 'em seven at a time.

LS: So you're in the backseat.

Bear: Yeah. And I'm just minding my business. Sniffing. Panting. I'll admit, I fell asleep for a few minutes, but I'm allowed to do that. Unlike some people, Officer Steve? Right? Like I don't know you're not supposed to do your speeding watches with your eyes closed? See, it's this shit that I---

LS: Let's stay focused here. You're in the backseat.

Bear: I'm sorry. Yeah, so I'm in the backseat, and I see Antonio walk by. And I give him a shout-out.

Bear: Oh, no. My accent's horrible. So's Antonio's, because he tried to talk back.

LS: So he was saying something?

Bear: Well, I think he was trying to say "Thanks." But there's a tone, and an accent he had missing, and he ended up saying. He was working in a dialect of Wolfhound or Dane or something, too. Like, terrible Rosetta Stone stuff. I hope he didn't take that from UF, because they need to fire some dudes if that was the case.

LS: We have a transcript? Let's listen. 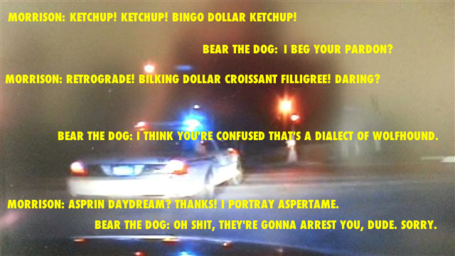 Bear: Yeah, so that's when they took him in. He was pissed. I was trying to explain to the cops what was happening, but...

Bear: They only speak Irish Setter. It's, like, the easiest dialect of dog. The piglatin of dog, if you will.

LS: So they can't talk to you? Even if you're telling them not to arrest someone?

Bear: Nope. I was sitting there telling them a guy just walked by with a pocket full of meth, and the good stuff, too, not a whiff of toilet cleaner on it. And they're stuffing some dumbass football player into the front seat while I'm yelling this. Peckerwoods.

LS: Do you think they did the right thing?

Bear: Well, yeah, if only because you probably shouldn't bark at me. I'm a police dog, and I'm an officer of the law, technically. You know, EVEN IF I HAVE TO GO OUTSIDE NETWORK FOR EVEN THE SIMPLEST OF WORMING PROCEDURES.

LS: So you think he should have been arrested?

Bear: I'm saying a dog would have gotten a lot worse in the situation. And that I'd like a break room with TV that I like on, not that Animal Planet shit left on 24/7.

Bear: Does a Nazi watch the History Channel at night? Nah, you wanna get away from work. I'm a Ninja Warrior fan. Another place you won't see dogs get their due, mind you.

LS: Don't you have to have hands to do that?