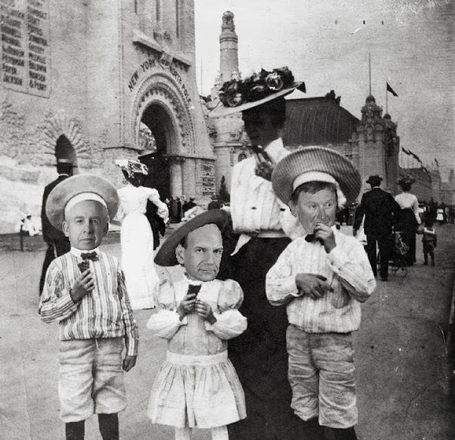 Coach Hortense Jones of the University of Mississippi notifies the collected that starting halfback Invictus Malone of Meridian, Mississippi will not be playing this fall. A buggy accident in Memphis has claimed his right leg to the knee. Four is the number of Mississippi players who have fallen prey to the hungry spoke-mouths of Memphisian horse-carts this off-season.

Ice delivery for the Tuesday p.m. session was late. Thirty-seven died of apoplexy.

Please avoid the ham sandwiches. They have caused several scribes to founder and swell with illness as the dead goats of the field would.

The telegraph operator will be lunching from 12:30 to 1:30. His spelling corrupts due to drink as the day goes on; therefore, compose stories carefully, and in handwriting a blurred eye could read with ease.

The afternoon session has been cancelled due to cicadas.

Vanderbilt coach Darcy Chillberth has graciously conceded to give the Irish media five minutes of questioning time, provided they stay away from his daughters.

Arkansas coach Shelley Cumberland declares his team "shall ne'er again visit the brutal climes of the Inuit." The Razorbacks host Alaska Preparatory College for the Spiritually Ruptured this year after losing a road game to the Fightin' Damned last season, 6-5.

The arrival of Missouri football personnel to SEC meetings remains a mystery. They will be sheltered in the stables until the investigation is complete.

Please alert the owner of the rabid pitbull in the Magnolia room that he shall be charged for all Pasteur treatments resulting from its foam-riddled insults to the flesh. Additionally, the pitbull shall not be credentialed for any future media events.

Cockfighting is not permitted in the main interviewing hall. Please confine all contests of animal strength to the foyer, and toss all carcasses and casualties of combat into Shitbone Alley adjacent to the property.

Men's restrooms shall be open at 8 a.m. and will close promptly at 6 p.m. Women may take conveniences in the nearby pecan tree orchard.

A partial collapse of the hotel last night was confirmed by the town mayor to be "owing to Asiatic sympathies from our Secretary of War." When asked to elaborate, said mayor beat this reporter soundly about the face and ribcage.

Deadline for registration for the scribes and functionaries' whoring tourney is 2 p.m. on Wednesday.

Federal marshals in need of serving warrants, summons, and other writs of law are asked to refrain from pulling coaches off the podium as they speak, or from laying down subduing fire from the aisles in their apprehension.

The use of firearms as a rhetorical device is prohibited except to note spaces in speech where a point of explanation would be utilized.

Representatives of the University of Florida will be available beginning at three o'clock post meridiem until their traditional violation of the Comstock Act. Children under six are asked to be left with the Watch-Mule.

The annual media golf outing shall continue from the ninth hole following the cancellation of Tuesday's rounds due to banditry.

Alabama coach Dixie "Deadlegs" Waller has been detained by marshals while en route. He has legalities to unwind in Borehole County. In his stead, Governor Riblets will speak in his stead on football and other varied topics extemporaneously. You are asked disregard any discussion of eugenics, race, and other topics of non-sporting interest.

The organizers wish to reiterate their firm belief that it does no offense to the First Amendment to bar Saul Finebaum from these proceedings given his persistent shouts of "AUSTRIA-HUNGARY PLAYED A WEAK SCHEDULE" last year.