THE NEW ORIGINAL EXCLUSIVE (UNLESS YOU SAW THE BOLLYWOOD ORIGINAL)

Share All sharing options for: SYFY ORIGINAL: HUGHPACABRA VS. THE ALAMO BOWL 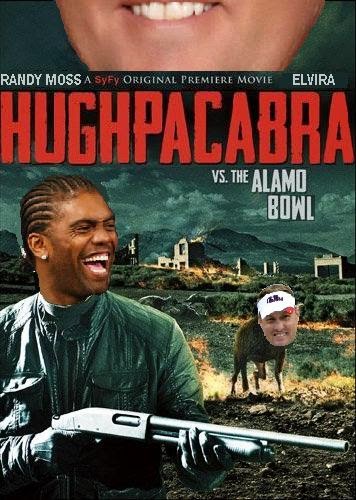 It's a quiet fall in New Mexico when rancher and family man Bulk Charcuterie starts losing his cattle to a mysterious killer on the range.

This is the second screenplay written entirely by a horse (Life Is Beautiful).

The bowl tie-in depicted in the movie is not possible by current contract, but producers felt the presence of successful Ole Miss football in the plot already established to the audience that this was firmly sci-fi/horror.

Randy Moss does all his own brisk walking in the film.

San Antonio, depicted as a bustling metropolis in the film, is actually a fictional setting shot on the backlot of Tyler Perry Studios.

"Just like me (cocks rifle) the G is silent." - Bulk Charcuterie