HE'S BACK, AND YOU CAN'T DO CHITT TO HIM

Share All sharing options for: WAKE UP AMERICA: HARVEY UPDYKE IS TALKING CHITT 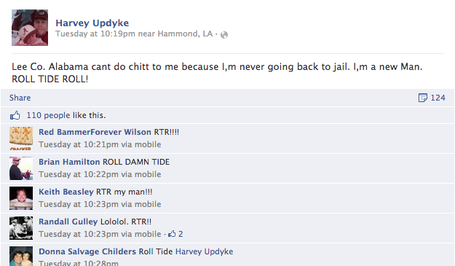 Bama's won two national titles since Harvey poisoned those trees. Lee County might not be able to get you back in jail, but having him incarcerated or wanted on something has coincided with the best run in Alabama's recent history, so watch your ass. The superstitious might be framing you for something just to keep the Tide rolling. Chitt, you might be able to talk Harvey into framing Harvey for something, which should be a lot easier because he apparently lives in Hammond, Louisiana, now, and see: "Louisiana legal system."

Then, of course, Harvey would be found guilty of falsely reporting a crime and then confessing to it...WHICH WOULD BE THE NATIONAL TITLE OF STUPID CONSPIRATORIAL CRIMES TOPPING EVEN HARVEY UPDYKE'S PREVIOUS TITLE HOLDER OF COMMITTING A GROUNDWATER POISONING HATE CRIME AGAINST TREES. He goes to jail again by 2014 as part of The Process, Bama wins another one, and you better get a surfboard because the only way to deal with the Tide is to keep ridin' it, baby. Roll speciously lucky tree-poisoning streaks, y'all.

P.S. The largest tree in America is named General Sherman, Harvey, and I'm pretty sure just his name is a form of talkin' shit about the Tide. Free man, cheap gas, and smooth interstates all the way, Harv. It's your choice, but we're pretty sure Coach Saban's waiting on you to show your value to the team here.