THE SECRET INGREDIENT IS DIABETES

LOUIS NIX IS ENJOYING HIS UNDERGRADUATE EXPERIENCE AND IS A WITTY GENTLEMAN.

The surprise in this Cracker Jacks box is probably Diabetes. I guess i wont eat them today.

The very large Notre Dame defensive lineman also enjoys lip-syncing songs of passion while eating bananas, celebratory dancing for the Miami Heat, and hitting on Alex Flanagan, but for her mind, and not her body. We are glad he was not injured horribly in the national title game, as he is large and entertaining and also quite good at college football. (Please don't tell ND PR this, as they will begin pushing him as a Heisman Candidate.) (Not that a giant defensive tackle winning the Heisman wouldn't be awesome.)

NOTE: Nix stole this tweet. HE'S THE PRODIGAL SAM OF CFB TWITTER (or is just repeating something funny he heard, whatever.)

THE RON PRINCE LOVE SWEEPSTAKES. Pile a thousand warnings in front of this: it is a message board thread of disgruntled fans, and none of their identities are verified, and for all anyone knows the lady in this thread could be a 55 year old man typing from a public library in Topeka. It probably IS a 55 year old man in a Topeka library, and he has a gift for prose and character voice he should have discovered earlier in life.

But even if this is deranged anti-fan fiction, we want these words in our life. (Start around page seven or so.)

If you ask him, RP will tell you that he is a family man. Proud father and whatnot. He will also tell you that he is a true leader of men and a fine example for his young players. Just ask and he is happy to describe all of his virtues. As for being a great catch, here is what he told me: "hundreds of women want me. You must feel great. You just won the Ron Prince love sweepstakes." (with a straight face.) Lucky me.

LEGAL NOTICE: THIS IS UTTERLY FALSE AND HEARSAY AND WE JUST LIKE READING METAFICTION ABOUT RON PRINCE, OKAY?

THE PARROTHEADS OF COLLEGE FOOTBALL. We feel a little bit queasy about Hal Mumme and June Jones likening the spread of pass-first offenses like the run 'n shoot and Air Raid to Buffettdom, but the analogy isn't entirely inaccurate. Also, please remember that these two will actually be working with each other this year in a wet dream you had about football from 1999. 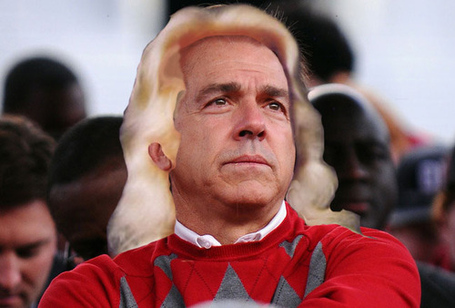 TRAILER PARK HERO. To be fair, it wasn't a trailer park, but a trailer on its own lot, but Gus Malzahn's roots in a town that doesn't even have football anymore -- and coaching on little to nothing out of the aforementioned trailer-- easily makes him SEC-compatible by background alone. Auburn's head coach living in a trailer at one point in his life is the easy joke here, but we'd imagine the percentage of coaches who have lived in a trailer at one point is way higher than the general population. (We know Leach did, for instance, when he was at Iowa Wesleyan.)

GIVE CREDIT WHEN DUE: UCF's move to the AAC does seem like it puts them in the position to be really, really successful in year one. Poor, poor Georgia State, however, is going to die violently.

CARLOS DAVIS TOOK THAT BOOTLEG ACT. Ole Miss won't suffer any institutional penalties for playing Carlos Davis when he was playing under eligibility that hinged on an ACT score that, it turns out, would be cancelled after the season.

ETC: We don't know when this happened, but here we are. Robot Vacuum Cleaner Simulator is going to slaughter GTA V in sales. "Gay Liotta is back, and he...has...gone...insane."