You can hate squirrels, but it's simply rude to take joy in their flattened corpses littering the road, and even worse to swerve to hit them double-good-dead. Randy Edsall has suffered enough--not enough to root for him openly, mind you, but certainly enough to move him off the Enemies List. Additionally, Maryland may now fully occupy the role of ACC Deathbringer for teams with hope, dreams, and more than two functioning quarterbacks.

[/loses to UVA at home the next week]

Off the Enemies List due to one of the worst denouements to a football season on record. Will go right back onto the list the instant someone says "BCS Title spot," or mentions "doing things the right way" while openly swindling the national media for maximum Heisman votes.

Oh, you say, you're just making this up as you like? That part should make you very comfortable, people who have openly embraced Knute Rockne's fake sick children, fictional ladies of the mid-Pacific, and mythical claims to a BCS Title game slot. We sort of like you for the moment out of sympathy. You will spoil that, and we know it, but life's about the journey, and not just about the chance embraces that end with us throwing you out of the car at 80 miles an hour

P.S. You also have to start the year dealing with this, and we like disaster movies more than the average human does.

He's simply become someone too useful (for our purposes, at least) to hate.

He also tends to be nakedly wrong about almost everything, a kind of talent in itself. (See: Ron Cherry, Bob Stoops.) Additionally, his Twitter feed is a nonstop ode to the value of a Pitt education and a secondary stint in the University of Sports Broadcasting, his on-air presence is clearly a fart-mask of sarcasm he can't do for three minutes without giggling through, And ooh! Burn Notice! Harris, he's talking about Burn Notice!

You always let Gin back in. (The entire year 2004 wasn't your fault, anyway.)

We kid! You're a dead man for haunting our dreams and spoiling our days. Watch your ass, and enjoy your permanent slot on the Enemies List.

The Joey Crawford of college football referees has a particularly worn spot on the Enemies List, but never without a tinge of respect and warmth. It takes a special kind of man to constipate a football game as badly and ineptly as Ron Cherry, and we at EDSBS are about recognizing special talent in all its forms--including that which itself is a special anti-talent.

Bob Stoops was on the list? Only as half a residual punching bag for the woes of the Big 12, with Mack Brown making up the other, even richer half of the conference's dollar-sneezing Statler and Waldorf act heckling the SEC, each other, and in Stoops' case anything he happened to find displeasing at that particular moment. Bob Stoops has, at one point in the past three years, raged about chafed thighs, and how no powder on earth solves the devilment of the vermillion ham meat he carries around on his legs. (And if he hasn't, you would believe us if we told you.)

And with his rampage through a grab bag of college football's hot-button issues this offseason--and landing squarely in the wrong on almost all of them--you'd think we'd just qualify him solo, and save a spot on the bench for him in the Enemies of the State edition. However, two things complicate this:

1.) He did just show up and help in Moore, Oklahoma without telling anyone, alerting a reporter, or doing much to draw attention to himself, and that's pretty great and human of him

2.) Overly Emotional Stoops is pretty damn entertaining, and we'd like to see this trend continue unabated through the season under the real, crushing pressure of a full college football schedule. This is what he's been doing without a whole lot of people around; with the glare of camera lights and live television, the results could be spectacular. Call Animal Control, and have them wait by the door of the press conference with a catch net and snare.

3.) It's possible Mike's living with him and "is really close to finding his own place but doesn't want to rush anything." Mike Stoops is, in fact, spending his weekends playing air hockey at the bowling alley.

DEBORAH YOW (PROMOTED)
Deb. DEB. The Notorious T.O.B. was THIIIIIIIIIIIIIIIIIIIIIIIIIIIIIIS CLOSE* to making it all work! But you just had to act a fool. Are we just supposed to be okay with your hatin' ass? We're not Deb. We're not.
*Was not actually close whatsoever. Was like that one kid at the Easter Egg hunt. The one who keeps checking the mailbox.
AUBURN (DEMOTED)
Firing Chizik in favor of Malzahn is a very transparent play to win our favor, but that doesn't mean we can't appreciate it. Besides, 2012 was a self-flagellation so vicious that it has to absolve you of some of your past sins. Here's a fun game! STEP 1. Count to 141 out loud. 2. That's the number of seconds Auburn held a lead in their last six games against FBS opponents last year. 3. That's it, that's the whole game.
JIM DELANY (PROMOTED)
In an offseason overflowing with Big Ten dumbassedness, Jim Delany has, somehow, been responsible for basically none of it. Perhaps silence really is golden, Mr. Delany, as it has bought you a demotion.

WHATEVER THE BEJESUS THIS IS: 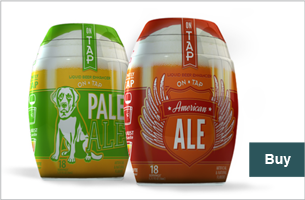 It is the nature of open commerce to produce far more products than we as consumers will ever want or need. The Plymouth Roadster, Bubble Yum soda - it's not hard to find examples. But "liquid beer enhancer" is more than something we don't need. It's something we should reject as loudly as possible. Syrup is for two things: 1) breakfast foods and 2) sexy R&B video interludes. Not beer. Never beer.

Who the hell said you were allowed to become good at your job, Mike?

You change the name. You change the trophy to some boring piece of shit you could get on eBay for eighteen bucks. And then you force us to watch Michigan State and TCU headbutt each other to death. Do you want us to force you to take UCF? We'll do it. Don't push us.