Share All sharing options for: THE EMOTIONAL STATE OF COACH BOB STOOPS

Bob Stoops has to appear tough in public. It's just part of being a leader. But Bob Stoops has feelings, and they can be measured using this scientific chart. 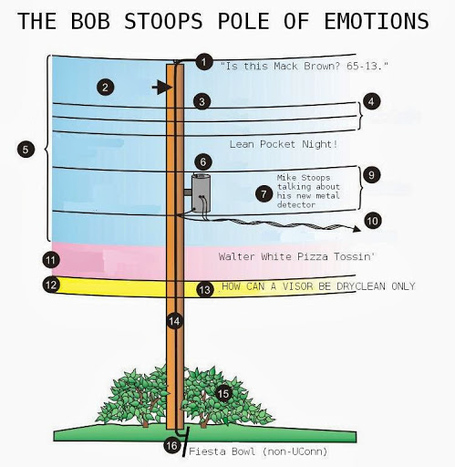 Where is Bob Stoops on this spectrum today? First, we must list the things Bob Stoops is currently sick and tired of:

- Hearing about how good the SEC is

- Cargo pants bashing, like you've got a better idea for how a fella's supposed to carry all his movie theater reward club cards, smart aleck

- Super groups, because you gotta be a certain shameless to ride Orbison's coattails like that, Tom Petty

Based on the above, we estimate the current emotional state of Bob Stoops to be as follows: