FULMER CUPDATE: KANSAS GETS ANOTHER FIRST

MAY TURNED OUT TO BE A HECTIC MONTH, ESPECIALLY IN PULLMAN

Share All sharing options for: FULMER CUPDATE: KANSAS GETS ANOTHER FIRST

The Big Board comes courtesy of Brian, currently swatting mountain climbers and their pesky pickaxes off the second tallest structure in the world, his penis. (Reggie Nelson's still tops his, or at least until Brian gets that radio antenna extension on the top.) Updates and clarifications follow. 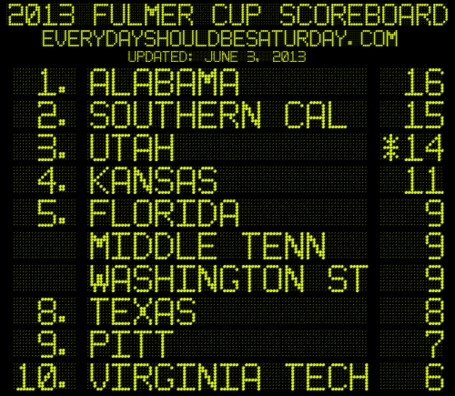 KANSAS. Home invasion is a rare thing, but Kansas football under Charlie Weis has been full of firsts. For instance, we're willing to bet this is the first time a player has managed to commit to one FBS school (Notre Dame,) attend three FBS schools Cal, Florida, and KU,) rack up arrests at two, and make the finisher a whopping three-felony finale with charges of aggravated robbery, conspiracy to commit aggravated robbery, and kidnapping. That's nine points for Kansas, or roughly what Charlie Weis considers a dominating halftime point total.

WAZZU. Let's start with who's NOT getting charged, or at least hasn't been charged yet in Pullman. Running back Teondray Campbell has been charged with nothing following an incident he was allegedly involved in at a party on May 7th. The reason: those involved did not want to press charges, and did not cooperate with officers. Everything's still technically in limbo, so we'll just assign a placeholder of one point for the moment, and adjust scores later.

Two other players from Washington State are not as lucky to have such forgiving friends-in-amateur-combat. Toni Pole gave a false name to police, and garners one point in the Fulmer Cup for a "gross misdemeanor," which we would like to believe means he gave a very immature fake name, and not merely an alias. ("Major Prolapse. Yup, that's M-a-j-o-r..."

Logan Mayes also picked up a hit and run charge of the misdemeanor variety, bringing Wazzu to a total of four points with a bonus point awarded for being particularly active in a very short span of time. Pullman: where it's so boring it's inevitably exciting.

AKRON. The MAC does not play when it comes to stealing four hundred dollar bongs. Four points for that, because the felony burglary charge deserves a bonus point for waving a gun around in a smoke shop. (We'd award another point if he called it a bong to the clerk's face, because GET OUT OF MY STORE okay, no, shit, you just do what you want to do.)

OKLAHOMA. Backup QB Kendal Thompson was incoherent and either unwilling or unable to obey an officer's commands when police found him sleeping on a grassy hill in Norman. Ten years ago we had Bob Hope, Johnny Cash, and could sleep comfortably on a hill while our livers fought the eternal battle against complex sugars in the blood through the night.

Now we have the son of Charles Thompson--yes, that Charles Thompson of Oklahoma--getting two points for the Oklahoma Sooners for public intox and interference with a public official charges. And Johnny Cash shot Bob Hope in a game of pinochle or something.

TROY. Jadarius Gardner of the Trojans was arrested along with a Troy basketball player for disorderly conduct. (Disorderly conduct at 315 Exchange in Troy seems to be a common thing.) One point for Troy, which is like the St. Paul to Auburn's Minneapolis, but in some dystopian Alabama alt-universe.

COLORADO. One point for a misdemeanor shovin' incident for Jordan Webb.

UTSA. We'll give one point for getting in an officer's face officially, but "black guy gets tased at the apartment pool by off-duty cops working security" never sounds right to us.

NAVY. No points awarded, but we are aware of this and are tracking it.

The poorly kept Fulmer Cup accounts have been cleared. Go in peace, and sleep indoors after a night of drinking if possible.