When Dick Coffee traveled to Birmingham to watch Alabama beat Furman on September 20, 1946, he was beginning, whether he knew it or not, on a long journey that would not end until June 21, 2013, when he passed away. In those nearly seven decades, Coffee went to every Crimson Tide game - home, away, bowl, whatever. He got to see a lot of wins and plenty of championships. But it's the miserable, queasy, how-is-this-happening losses that make Coffee's streak impressive, and so, in chronological order, we present the ten worst Alabama games during his tenure:

1. 1951: Villanova 41, Alabama 18. The first and only meeting of these teams, because once a guest beats the hell out of you in your own house you do not invite them back. This is why you want to go to a nine game schedule, Nick Saban. It avoids all the "why are you too scared to schedule FCS Villanova and avenge this loss" questions.

2. 1955: Auburn 26, Alabama 0. A shutout that sealed Alabama's only winless season in its history, this game came in the middle of a twenty game streak in which the Tide didn't record a victory. For reference, here are some teams that have never gone 0 and Anything: Arizona, Cal, Clemson, Louisville, Minnesota, Pitt, Texas Tech.

3. 1958: Tulane 13, Alabama 7. Bear Bryant remains the last coach in Tuscaloosa to lose to the Green Wave. Yet, somehow, he's considered better than Mike Shula, because history is written by charlatans.

4. 1965: Texas 21, Alabama 17. The BCS is in its death throes for many legitimate reasons, but "you can be declared the national champion before the bowls even take place and then lose a game in which you never hold the lead but it won't matter, still champions pawwwwwl" is not one of them.

5. 1972: Auburn 17, Alabama 16. It seems impossible that anyone who attended this game in person still has a firm grasp of reality. The first punt block returned for a touchdown is unusual and unexpected, sure, but not world-jarring. The second? Blocked by the same player? Returned by the same (separate) player? A RIFT IN SPACETIME ITSELF.

6. 1980: Mississippi State 6, Alabama 3. The Crimson Tide had not lost a conference game since October 1976. They had not lost to the Bulldogs since Eisenhower was president - and he'd been dead for eleven years. Skip to 3:55 below. Just trust me.

7. 1997: Kentucky 40, Alabama 34. Alabama has lost to the Wildcats exactly twice. The first was in 1922 and can therefore be explained as "it was 1922, nothing made sense." The second was this game. AND THEY LET MIKE DUBOSE KEEP HIS JOB AFTER THIS. Truly, the 90s were a time of senseless, stupid miracles.

8. 2000: UCF 40, Alabama 38. There are some acceptable ways you can lose your homecoming game to UCF, but all of them take place in the Mad Max universe. Mike DuBose did not survive this defeat, because the Willennium is a cruel and unforgiving dystopia. 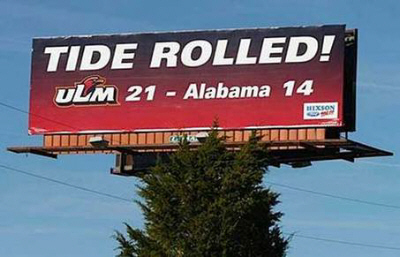