HOLD BACK, THEN TAP FORWARD + PUNCH. That's a special move in FIGHT HUNGER TURBO, the latest incarnation of the popular Pac-12 Vs. Big Ten video game series. No more watered down characters like Neuheise-Li or Z. Honda. Get ready for RichRog vs. Ferentzief!

SUSPICIOUS PURCHASE ALERT. If you're going to steal Bob Stoops's credit card, you'd better be aware of the man's spending habits. Buy something flashy, like a sports car, or an expensive watch, or a second scoop at Baskin Robbins? That'll get your ass flagged.

THERE ARE ONLY TWO WAYS OUT OF PITT. One is nearly transferring to UCLA but then coming back, maybe, if Paul Chryst is cool with it. The other is on the bus. Or you could take your own car. And there's also the airport. Actually, there are a lot of ways out of Pitt. I just wanted to sound tough.

NARDS GETS MONEY. Say you're an assistant coach for Michigan State. Right now, you're looking at a two year contract - unless, that is, you're Pat Narduzzi, makin' nearly half a million and getting that lucrative third year locked up. What's the negotiating secret that got Narduzzi all this paper? 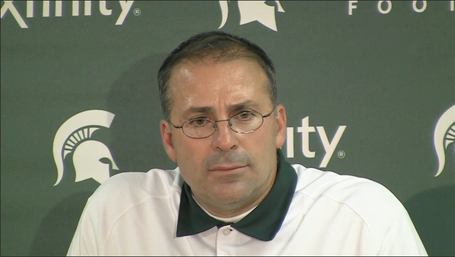 Top button. Nobody wants to tangle with a dude who dresses like a sociopath.