AND NOW A PICTURE OF A DANCING BEAR

DANCE, YOU BEAUTIFUL MOUNTAIN OF A MAN. Look. Legalities are sometimes stupid, and instagram is always stupid, mostly because it's a service that barely works with Twitter, and is of no use to a married person like us who isn't trolling for ass, or dependent on Facebook for sharing pictures of the kids with relatives. There is only one person who needs to be on Instagram, and that is Louis Nix, but due to Instagram's stupid-ass, non sharable bullshit legal policies, we can't embed the video per legal. 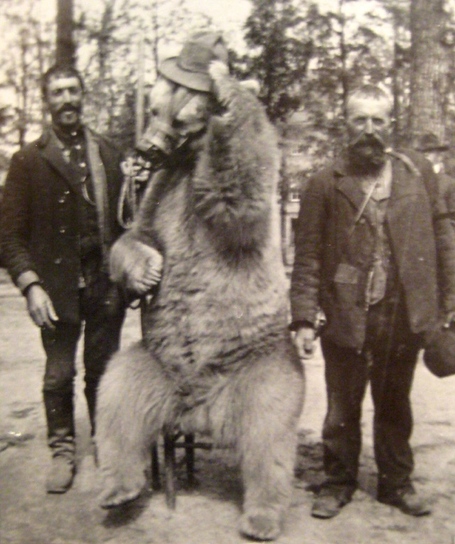 That is a creative commons licensed picture of a dancing bear, which if you click it will take you to video of Louis Nix, Notre Dame DT and Miami Heat fan, backing that thing up. Louis Nix of Notre Dame remains turnt up, all the time, all the way, and everywhere. Fuck Instagram. (Via SN, who just rode dirty and used it anyway.)

SORRY, CLUB TRILLION. The likenesses of some athletes may be worth more than others, so if the EA Sports/NCAA/Ed O'Bannon case does blow open the barrier between cash earned off athletes' likenesses and the athletes in college, the results might be applied unevenly. Sorry, Andy Staples: there is no royalty check coming for the '96 Florida team's appearance as a retro team in NCAA 2006, or at least one that would buy anything more than the skinniest, saddest rib off the cow.

GLEN COFFEE HAS BEEN OCCUPIED. The former Alabama running back wanted to do something tougher than playing for Nick Saban, like learning how to jump out of airplanes in the dark and killing people with everyday household objects.

BERT GOES TO HOGVILLE. The best phrase in this superb profile of BERT is "autographed the occasional prosthetic arm," because you know Arkansas is one of those states with lots and lots people missing limbs. You know: because Arkansas is hard like that, and also because some people have pet bears, and that goes sideways from time to time.

THE EMMERT CURSE IS REAL. And even if it isn't, we want it to be, and you have to respect our beliefs.

ETC: Oh, come to us, ballin'-ass bathtub of the gods. Oh god, that is not a fair kick. BACK THAT ASS UP, BITCH.