FRIDAY NONSENSE: WHY I GAVE UP THE RAT RACE AND JOINED GOOGLE PLUS

WE'RE GIVING UP THE GRIND AND MOVING TO FIND PEACE AND QUIET. WE'RE GOING TO GOOGLE PLUS

Share All sharing options for: FRIDAY NONSENSE: WHY I GAVE UP THE RAT RACE AND JOINED GOOGLE PLUS

With contributions by Run Home Jack

For a while, you want to be a part of everything in life. Then one day, you realize you can't be everywhere at once without being nowhere all at once. The rat race takes its toll. Suddenly, you find yourself wondering: is this it? Is this rushing around, day after day, running like a prize rat from one box to another in the name of simply keeping up, what life is? I had so much, and in doing so had nothing.

I wanted less. To have more in my life, I needed less. That's why I did the unthinkable.

That's why I left the big city, and moved to Google Plus. 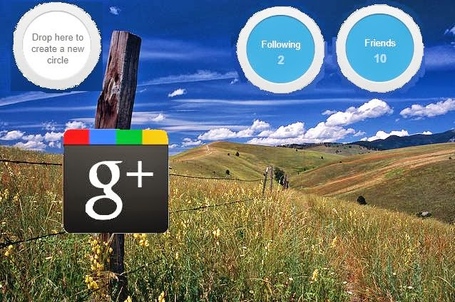 I'm not totally off the grid now, mind you. I still chat with people, but I don't really keep up like I used to because life, well...life's slower out here on the ranch. It moves in circles, and those circles don't ever change. No one out on the range here in Google Plus worries about their status. I know I don't: mine hasn't changed in years, and won't anytime soon. That's just the way it is out here, and we like it.

You ever seen a sunset on Google Plus? It's like God hittin' the dimmer switch, real slow with his mighty digits. The dark settles in, and you're not afraid of it because you get it. Out here there's nothing moving in the day, and nothing moving out there in the dark. Just you, your thoughts, and a cup of coffee to while away the cold night of the high digital prairies.

We share when we have to, but that's not often, and for a good reason. There's just not that much out here, and not many people to share it with when you got it. Sometimes a coyote might wander into one of my circles. Back east I might have freaked out about it, but here? I just feed the guy a scrap of some old Chive article plagiarized from something else, and let him go on his way.

Now, it ain't perfect. Winters are bad. I get lonely, sure. There are times when I have to keep myself occupied, and not always in the most productive ways. I look at breastfeeding pictures when i feel like it. Which, granted, is more than you'd think. But the point is I'm in charge, and those babies are all probably weaned by now, because those photos are really old, and haven't been updated in years at this point.

It's just the bears, me, and Phil Jackson out here. And that's the way we like it: no one to follow, since we make our own decisions. Nothing to share, because everyone out here in Google Plus already has everything they need. Well, except the one thing we all came her for: solitude, quiet, and a peace that doesn't exist anywhere else in this wide world.

Caught a fish the other day. Beautiful striped freshwater bass on a Tungsten Cone Head Wooly Bugger. Damn near five pounds, green as emeralds in my hand. Should have taken a picture, really. But that's not the point of living out here in Google Plus. The point is living, cowboy. One selfishly unshared moment at a time.

If I were one of those social media types, I'd say that unsharable content is the new sharable content. But I'm on Google Plus now, and just want to watch the grass blow in the autumn wind. By myself. By the quiet, undisturbed, and peaceful waters of Google Plus.

Yes, I suspect Google Plus might be the last unspoiled country left. Nobody here's even heard of Mad Men, so they can't tell you that Megan Draper turns out to be Spiro Agnew tuckin' it back.