SIX CASES AGAINST THE HORROR OF THE TIE GAME

Share All sharing options for: SIX CASES AGAINST THE HORROR OF THE TIE GAME

Did you know that in World Cup qualifying play this year, the Mexican national team has played to a draw five times in seven games? That's got to burn, and we hope it does because we are Americans, and wish nothing but misery and rains of flame and ashes upon El Tri.

That got us to thinking, though: what college football team had the neutral fortune to tie the most games in a single season? And after eliminating Michigan--the natural first guess due to gentlemanly friendship, and a school that tied only three times in a season as recently as 1992--we found them: The 1879 Stevens Ducks, who went 1-2-5.

These are actually the scores from a game called Graham-Tag, a predecessor to football invented in 1874 by a young William Kellogg to trick housewives in his neighborhood into ordering unnecessary weight loss cleats. The Ducks also played Rutgers four times in a single season, previewing Michigan State's 2018 Big Ten schedule a full 139 years before it happened. (They will also play Rutgers in the Montgomery Bowl that year for a fifth matchup.)

If you ever thought bringing back the misbegotten corpsebaby of the tie was a good idea, you are wrong. We have evidence in the form of six seasons so fraught with terror, discomfort, and boredom they could pass for musical theater. Avert your eyes, and do not expose pregnant women to these schedules. (Warning: exposure may cause Ray Goffism, or that thing where your baby looks like Dorf and walks around on his knees playing shitty golf.)

#MACtion existed before we even knew what MACtion was, mostly because in 1991 we had other priorities, and almost all of them had something to do with Dial MTV, and with keeping Tone Loc's "Wild Thing" in its proper throne at number one. This was all that was holding democracy aloft in 1991: the White House had been taken over by vague terrorists, Central Michigan was busy shredding any and all concept of a mathematically feasible tiebreaker by scoring all four of its ties in conference, and no one had the internet to upvote things into the President's office to be noticed.

Only your phone calls--carefully priced at $4.99 a minute, with an average wait time of 19 minutes--could keep Tone Loc at number one, and thus keep his carefully constructed cover intact. Liberty cost your parents like fifty bucks one June in the early '90s, and the way everyone did business then and now is an immense, uncalled act of fraud.

That campaign ended when Tone Loc saved the world, killed the terrorists, and celebrated by releasing "Funky Cold Medina," the promotional tune for his energy drink/celebratory beverage for being a fuckin' hero. Loc would prosper from none of this. He was too far ahead of his time, and probably won't see a dime from the unlicensed version of his story, White House Down, written with two protagonists because no one would believe a single man was capable of that much heroism AND appearing in a feature role in Posse.

Oh, and Central Michigan tied FOUR TIMES IN CONFERENCE PLAY. They should have been booted into the CFL for that shit.

You can take many roads to wind up with a record of 4-2-3, but there is perhaps none sadder than "winning your first four games by a combined score of 71-0 and then only scoring 14 points for the rest of the season." The true embarrassment here isn't the Tulane game (the Green Wave were 6-2 otherwise that year) or the Clemson double bagel (a team that went 6-2-2 and beat Tennessee). No, it's the Virginia tie - held to seven points by a defense that, in the two weeks prior, gave up 47 and 49 to Harvard and Centre. Do you even know what 47 points was worth in 1919? At least three dirigibles.

A tie is something like watching your 20 lose to a blackjack the dealer draws off a 15 - it is painful, but easy to rationalize as a statistical fluke of sorts. The back-to-back tie, however, is where you start to accuse the dealer of cheating, because you were up two hundred bucks before this new dealer showed up and when is Doreen coming back BRING BACK DOREEN. 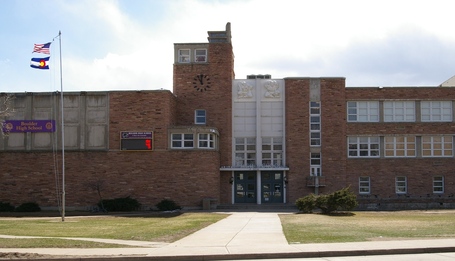 EAT SHIT, BOULDER HIGH! RIDIN' ON TWENTY-TWOS WHILE YOU GOT GOOSE EGGS IN THE PANTRY! WOOOO GO BUFFS! DON'T TELL YOUR MOMS ABOUT THIS GAME, BECAUSE THEY'D GET MAD AND STUFF. ALSO THAT LOOKS LIKE YOU FELL ON A NAIL, AND YOU BETTER NOT HOPE YOU GOT THE TETANUS. CAUSE IT'S 1906. INVEST IN STRAWS. YES, THE SHITTY PAPER KIND, BECAUSE IT'S STILL 1906 AND EVERYTHING SUCKS, AND YOU'VE PROBABLY GOT THE TETANUS. EARLY AMERICANS LOVED MILKSHAKES FOR A REASON.

The 1906 Colorado Buffaloes tied four teams: a team of Colorado alumni (presumably half actual Buffalo wearing cowboy vests and dusters,) the Washburn University Ichabods (terrifying, just simply terrifying,) Colorado State (a 0-0 tie where all participants might as well have had hooves,) and a finale with Colorado Mines where no touchdowns were found, and both teams were thrown bodily into the maw of an abandoned copper mine.

Colorado stayed there for over eighty years, re-emerged briefly in the 1980s and '90s, and then returned to that same mine to watch G4 for a bit and just figure some things out, dude.

The Cuban Missile Crisis was already close to a boiling point when the sun rose on October 27, 1962. At noon Eastern that day, USAF Major Rudolf Anderson was killed when his U-2F was shot down over Cuba. To the powerbrokers of the time, war must have seemed inevitable.

And then it happened. Georgia-Kentucky concluded in a 7-7 tie, and even the most hawkish members of the Russian and American militaries realized there were more serious threats to our humanity than international armed conflict. Krushchev ordered the dismantling of the missiles within 24 hours, and peace returned to our lands.

Then Georgia tied NC State a week later and forced the Russians to assassinate Eleanor Roosevelt within the week. The University of Georgia: Constantly Fucking With The Timeline.

If there is one argument against bringing back the tie to any college football game ever again, it is the icy grandeur of the UCLA Bruins' 1939 season. Oh, the Bruins didn't lose a game in 1939. Did tying four games, including two scoreless draws against Santa Clara and USC, bring on World War Two, and hasten the deaths of millions? There's no direct casual link, but yes. This season is to blame for World War Two, and every person killed in conflict in that great catastrophe. GO BRUINS, and you now have rickets.

(The 6-2 win over TCU to open the season, though? That's just clean living, right there.)