OPEN YOUR EYES. YOU'RE AT THE DUBAI BOWL.

YOU'RE IN A LAMBORGHINI. INSIDE A RACETRACK. INSIDE A LIMO

Share All sharing options for: OPEN YOUR EYES. YOU'RE AT THE DUBAI BOWL.

You're in your final game of the season. You're probably the fifth or sixth-ranked team in a conference. You're winning, and the clock is winding down. A bowl game, you say. We're going to get to go to a bowl game. But where? Shreveport? Montgomery? Dare dream of Boise? You close your eyes. The band plays.

Open those eyes. You're on a plane. That plane is made of pure platinum. Its engines have blades of diamonds. The fuel for those engines is an expensive champagne. The grapes that make that champagne are only grown on a lone peak in the Alps on five pieces of exposed cliffside tended by an order of blind monks. Those blind monks each make the equivalent of $7.2 million Euro a year. This jet uses over a thousand gallons of that champagne a day, and makes seventeen flights a month.

One of those blind monks is flying this plane to your bowl game. He's like a bat, and uses sonar and "good vibes" to find the runway. The runway that takes you to Dubai, and the Dubai Bowl.

You're in a limo. You're also driving a Lamborghini. You're driving a Lamborghini inside a limo that contains an entire F1 grade racing course inside it. You're realizing that going 5-7 with an exemption from the NCAA has gotten you into this Lamborghini, inside this limo, and that maybe losing to Kentucky that weekend wasn't a bad call, since they ended up in the Music City Bowl for the eighth year in a row. You're firing Mario Kart shells from the Lamborghini, because everything in Dubai is Mario Kart compatible. 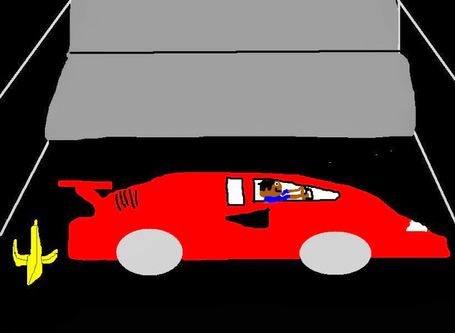 You step out of the Lamborghini inside the limo which is now inside a giant hotel made to look like the Dubai Bowl. You're now inside the Dubai Bowl, a hotel and stadium complex that spends 12 hours underwater each day, and then rises to the surface and comes to a resting spot 450 feet above the Persian Gulf. The hotel costs 485 billion Euro, and is the future of our species as we know it. It has neg-grav maglev propulsion systems centuries ahead of existing technology made by unstable Russian scientists, and can filter seawater for drinking, fuel, and conversion to gasoline for flame weaponry to prevent piracy. It has its own hospitals, plastic surgery clinics, and three Prada stores.

It also has a buffet.

You're in your hotel room inside the boutique hotel inside the Dubai Bowl/Sub-super-marine Life Support Sportsplexium. Your sheets are made of pure silk stretched over the beds of dead aristocrats who chose to end life rather than spending a moment in anything less than the perfection of the Dubai Bowl. No one has ever committed a luxurious suicide after attending the Independence Bowl. We have verified this using the CPUs that run the temperature controls/sex robot functions inside each Dubai Bowl bathroom. Each is more powerful than any computer known to man, and exists solely to make your robot sex sessions and showering as pleasurable an experience as anyone has ever had. 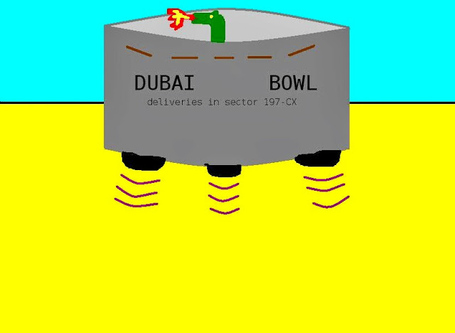 Sex robots are not operational on the Sabbath and during daily prayers for men. There is no such thing as a sex robot for women. You will be deported for asking about these at the Dubai Bowl.

There are, however, lesbian sex robots by request of Dana Holgorsen.

You turn and find yourself on the field at the Dubai Bowl. The grass is Kentucky bluegrass. The stands are pure marble lined with hand-stitched Italian seats. Each is capable of exploding at any time with the power of a pound of C4 wired to the seat to prevent disturbances. You marvel at the comfort and security you feel knowing this. The goalposts beckon skyward, each changing color to reflect the mood of each team.

Yours is glowing a deep red: the color of contentment, and ultimate happiness.

You feel a gift bag being placed into your hand. You open the simple plastic bag. Inside you find a small lemur. It smiles, and emerges from the bag and sits benignly on your shoulder. This lemur speaks seven languages, including English. It can cook exquisite royal Thai dishes, but is also an able pastry chef. It is fully housetrained, a not insignificant accomplishment for a Harvard graduate. It is a licensed masseur, and has overseen the growth funds for three different notable famous investors. It will kill for you, and has been genetically engineered to be immortal and partially fireproof. It never sleeps. It is capable of minor surgeries and is a keen listener.

You have met the best friend you will ever have.

You think how much better this is than any Best Buy Gift Certificate you would get in Shreveport.

You smile a smile you did not know you possessed.

You smile this smile because you are in the Dubai Bowl, an experience unlike any other on the planet.

And also because you are so high you can't feel your face, because the air is laced with aerosolized cocaine at all times.