THE FULMER CUP SUGGESTS YOU NEVER TAMPER WITH THE EVIDENCE

The Big Board is brought to you by Brian, whose patience almost as far to the horizon as his prodigious member. We were behind in updating the Cup, not him. 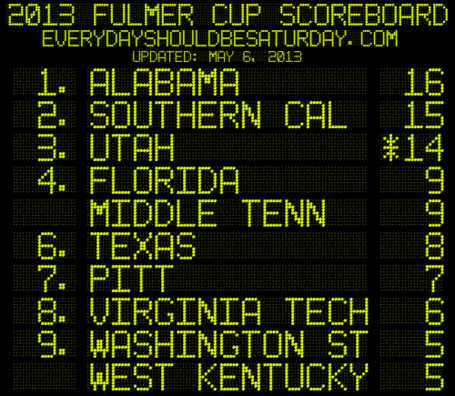 After much delay, the Fulmer Cup is at last updated. Please note that we did our best to tally every possible arrest, but probably forgot a few along the way because keeping tabs on 120+ college football teams and their arrests is a large and unwieldy process. Additionally, please remember that people no longer on the team do not qualify--i.e. Tharold Simon of LSU, who was arrested after declaring for the draft on Tharold Simon Day in his hometown.

PITT. Who hasn't had a roommate selling heroin labled "Ralph Lauren?" It really turned out a lot better than "Pitt players arrested in heroin bust" had any right to turn out, but paraphernalia charges do get you a point a piece. Pitt gets off just as badly or worse in the domestic violence arrest of Tra'von Chapman, who has been suspended from the team following an incident that involved pulling the hair of his girlfriend in a fight.

That felony arrest, the bonus point for slappin' ladies, and the three misdemeanor arrests bring the total for Pitt to seven points in the 2013 Fulmer Cup.

LSU. Jeremy Hill hasn't been charged formally yet for simple battery, but that should be two points pending a.) a single point for misdemeanor battery, and b.) a bonus point for high-fiving a friend after knocking the man out, something he did on camera.

TEXAS. Cayleb Jones beat the daylights out of a tennis player, thus proving his true love to a woman who totally took him back instantly and had babies with him! That did not happen, but four points for felony assault and a bonus for WINNING LOVE STRATEGIES IN ACTION did, along with two points for DUI for Longhorn Kendall Sanders. Thus does Texas climb to seven points in the Fulmer Cup, and thus equal what Mack Brown defines as "a healthy day on offense, boys."

VIRGINIA TECH. "Malicious wounding" isn't something you see all that often in court documents, but Blacksburg is a magical place where you see a lot of things you don't normally see like "Tight ends playing quarterback" and "Frank Beamer dancing a jig all by his jolly lonesome." A felony charge and two misdemeanors for RB Michael Holmes plus a bonus for "seriously, malicious wounding" gets the Hokies six points in the 2013 Fulmer Cup.

WESTERN KENTUCKY. Never tamper with the evidence. Why? Because tampering with the evidence in what would have been a minor traffic stop gets you a damn felony charge, that's why. This explains why WKU football and basketball player Kene Anyigbo gets five points for a felony tampering charge to go with a failure to use headlights and minor weed possession charge. (Even money on "attempted to eat marijuana or throw out window.")

MARSHALL. Another lesson in procedural faux pas: giving your name to police as "Mike Jennings" when you are in fact Kevin Grooms, a Thundering Herd football player who was already getting ticketed for underage consumption. Two points are awarded by any name to Marshall.

OLE MISS. Three points for Philander Moore's domestic violence case are awarded, even after Moore was kicked off the team for the incident.

COLORADO STATE. A domestic violence incident gets two points for the Rams, who put a new spin on the genre by having a case where the girlfriend was arrested, too.

MIAMI. Weed possession in Miami shouldn't even really be considered a crime, but whatever, outdated and uncool criminal code. Two points for an otherwise orderly and dull Hurricanes team.

Thus are the current accounts of the Fulmer Cup 2013 settled. We probably missed something, but that's what happens when you don't update since February. Go in peace, and don't tamper with the evidence. It's never worth it, no matter what your lawyer might say. (Also, make sure your attorney is not just a man imitating an attorney, unless your case is being prosecuted in the state of Florida, where law licenses are not required for basic legal work.)