THE LONG DESCENT OF LES MILES

LES MILES RAPPELLED DOWN A BUILDING TODAY, AND IS NOW FLOATING OVER MISSISSIPPI

Share All sharing options for: THE LONG DESCENT OF LES MILES

1. Les Miles begins to rappel from the roof of the 24 story One American Plaza in Baton Rouge, Louisiana. He is set to begin rappelling at 2:04 p.m. to coincide with the safety plans of the Baton Rouge Fire and Rescue. Miles allows several minutes to run off the clock, pees off the backside of the building, exclaims "Makin' it hail!" and finally begins his descent at 2:12 p.m. Miles explains that he had a kidney stone, and thus was not merely making it rain.

2. Miles scampers sideways, peers in office window of Carol Barnes, actuary. He writes a phone number on the glass in wax crayon. She blushes. Later, she will call this number at two in the morning and get a bleary Bret Bielema on the line hundreds of miles way in Arkansas. She will apologize and attempt to hang up, but Bielema stops her. "Wake the bear, feed the bear, lady." The two later enjoy a satisfactory exchange of affections in a Bossier City hotel room. 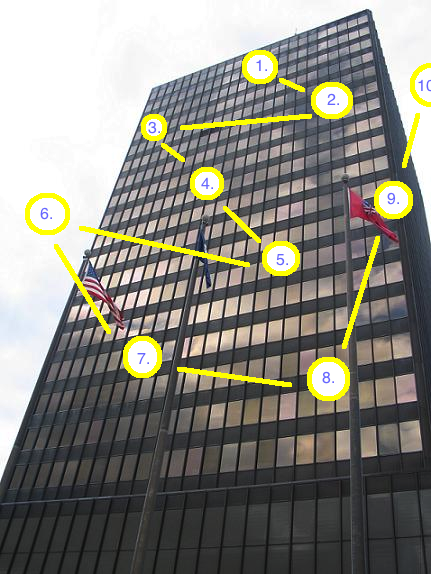 3. Miles runs sideways across the face of the building yelling "MISSION IMPTOSSIBLE" before nearly yanking himself out of his harness and inflicting unimaginable torque on all five testicles.

4. A winded and wincing Miles comes to a rest and enjoys a juice box and a twist of fresh fescue before continuing.

5. Miles sets up a base camp and settles in for the night. He warns his companions that if the weather sets in, they may run out of food. When the food runs out the hunger sets in; when the hunger sets in, men become animals. His companions on the ledge are three pigeons and his invisible friend Marlborough, a mini-pony and special teams expert. Marlborough exclaims "OH HAIL NO, LES, I AIN'T GETTIN' PLAYED LIKE THAT, WODIE!" Marlborough may talk like a middle-aged white man's idea of a No Limit rapper. He also may be the first one eaten in a survival situation if he keeps up that kind of attitude.

6. [Another wild run across the side of the building the next morning] [RIP Marlborough the invisible No Limit mini-pony]

7. Miles comes to a crashing halt, again bruising all five testicles, but still smiling thinking about how Nick Saban would need a child-sized harness for rappelling. A tiny, tiny harness. He plays a game of Tic-Tac-Toe with an office worker at the window. 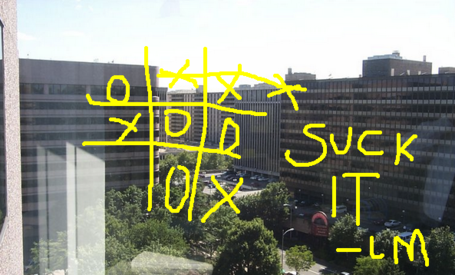 He wins in predictable fashion.

8. Miles "pops in on those bastards in accounting" but discovers an unblocked bathroom window, and a man just squatting down to relieve himself. "GO FOR TWO!!!" shouts Miles. He holds up one index finger as he says this.

10. Les Miles, last heard muttering "Good day. Good breeze. Let's see where the zephyrs take us," floats eastward and upward across Baton Rouge. He is believed to be somewhere over southern Mississippi, marveling at the drainage patterns and waving to onlookers.