NINE SEC GAMES IS NO BIG DEAL? WE BEG TO DIFFER.

You can look at the thirteen SEC coaches that voted against adding a conference game and call them cowards. You can insist that they're clinging to home games against cupcakes to try and make teams look better than they actually are. You can praise Nick Saban as forward thinking and unafraid to face greater challenges. But you are wrong, and this is what you're actually supporting:

2014: The SEC moves to nine conference games per team, and the resulting additional losses mean there are not enough bowl-eligible teams for all the conference's tie-ins. The Compass Bowl is forced to feature Pitt versus The Tragedy Of The Commons. Shreveport is quickly eaten to the ground.

2018: A tenth conference game is added, in a manner of speaking. "In the spirit of bringing Missouri more into the fold, we're going to have every team in the conference play them," announces Mike Slive. "And teams that already have them on the schedule will get a second game against Mizzou." When it's pointed out that this will force the Tigers to play a 23 game schedule just in conference, Slive is unconcerned. "It's still better than where they would have been." He is right, as the Big 12 is on year two of its new You Play Texas Whenever Texas Shows Up Too Bad If Y'Ain't Ready scheduling system.

2021: In a surprise move, the SEC jumps straight to a twelve game conference schedule. That forces the cancellation of multiple rivalry games, which jilted fans and teams respond to with various forms of protest. Florida State's athletic department puts out a statement vowing to face Florida in a bowl game. Clemson students vandalize the South Carolina campus with pawprints. A retired Paul Johnson decides to peacefully protest by taking up residence on the 50 yard line of Sanford Stadium. He will live there for the next 17 years, dispensing wisdom to anyone who brings him a peppermint.

2027: Coaches vote to keep a 19 game conference schedule rather than moving to 20. "We have to think about the welfare of these kids as students first," says The Preserved Consciousness of Mark Richt Stored Inside A Robotic Eagle.

2044: In an abrupt change of pace, the SEC moves to a one game conference schedule on a trial basis. When fans ask how it's even possible to select division winners if each team only plays one conference game, the following clarification is released: 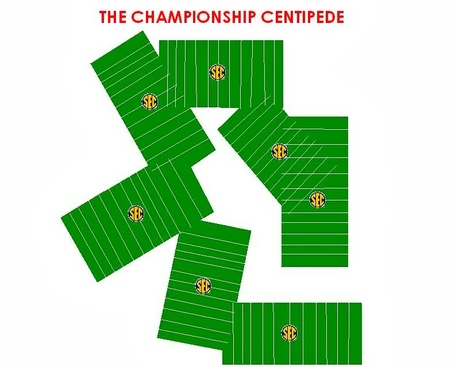 THE CHAMPIONSHIP CENTIPEDE. A month long, with all 14 teams playing each other at once over seven interconnected fields. (Sundays are taken off for purposes of TV timeouts.) The experiment fizzles on day 18, however, when Penn Wagers simultaneously makes six incorrect calls in six different games.

2076: One columnist dares to suggest the SEC's new 300 Game Megaschedule (in honor of America's tricentennial) is dangerous and unnecessary. He is exiled to MX-117V, an asteroid with a mining colony overseen by Steve Spurrier Jr. IV. Auburn goes 226-74 in conference, and the NCAA opens an investigation after it is alleged that players are abusing illegal gamma radiation and submitting clean cheek cell samples from the prisoners floating in Jordan-Hare's subterranean river of slime. No NCAA violations are substantiated.

2103: A proposal to expand the conference schedule to 666 games per team passes by three votes, and the Earth opens up to reveal a newly revived Nick Saban, ushering in the end of the world. "Apocalypse," he mutters, "is the only way I'll have time for anything."