CLARIFYING IT FOR THE HATERS

Y'all gotta get all on Nick Saban and what he does with recruitin'. Why? The man's got enough goin' on without you getting all up his butt about who's got a scholarship offer, and when they have it, and how many are in that class, and other such dumbass questions the media wants to ask about Alabama recruiting.

Like everything else about Alabama, we're gonna have to explain it to the haters. There's a process. That process looks like this. It's simple: either Alabam's slightly possibly definitely interested in you, or they ain't. If they ain', Hugh Freeze wants to talk to you.

But Coach Freeze, I'm not even a football player! Well, we don't understand it either, but Mississippi has always been touched by the angels. (Or at least just "touched.") 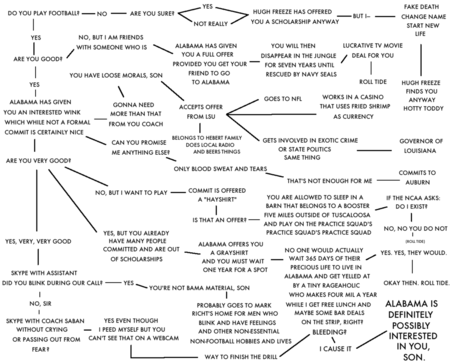 Simple, to the point, and as clear as shine in the jar. Either Alabama's interested in you, or they ain't, and if you don't like it well you can always go share your feelings with Pastor Richt in Athens. He hugs people, we've heard, and if that's your idea of manhood you can go there. We're not gonna waste your time, and neither will Cullman Liquidation or Alabama football.