PLEASE DO NOT GIVE MIKE THE TIGER A BIRTHDAY HAT

NEVER SAY MEMPHIS DOES NOT APPRECIATE ITS SPECIAL TEAMS. 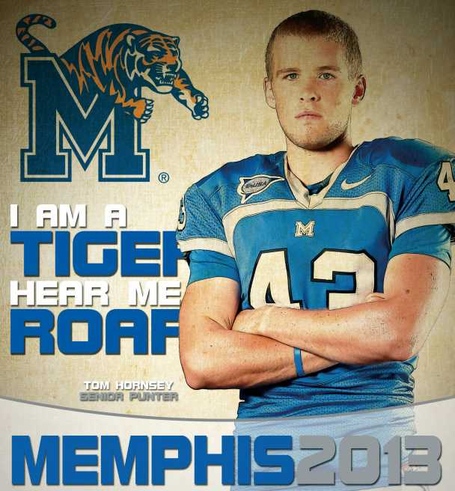 That is the cover of the Memphis media guide for 2013, and that is their punter, Tom Hornsey, who will be a likely Ray Guy Award winner again, and does therefore deserve some attention, and is still a punter on the cover of your damn media guide. He does have two unfair advantages over many other punters: being Australian and therefore naturally gifted at surviving in Memphis and doing punting things, and getting a shitload of opportunities to punt as the punter for the Memphis football team. (via Paul Myerberg)

THE DEVIL HIMSELF. No, that's pretty accurate.

"I've always wanted to work with Will," Davis said. "Will's got a plan. Will coached under the devil himself for seven years. I only did three. He did seven. And his DNA is not any different than Nick."

The Florida offensive line coach also implied Nick Saban does not have a personality, and he would know this because this is something every other person who has ever worked with Nick Saban has said. Nick Saban is not a normal or a nice person, and is a driven cyborg capable of rare moments of humanity and constant moments of driven inhuman perfectionism. This is not news to anyone in any universe, and is the reason he is paid a lot of money to coach. (P.S. Also, he's the devil. HAIL SABAN.)

PENN STATE DOCTORS NEGLIGENCE SOMETHING SOMETHING. The latest issue of SI has a gigantic article on Penn State's medical staff and various accusations of malpractice, including but not limited to trainers administering injections without the authority to do so, a nasty-sounding incident with an electrostim machine, and trainers lancing a boil on a player. The first two sound bad, and the third sounds like something that was going to happen anyway in a dorm room with one player holding a camera, and three others standing around going "GAAAWWWW SICK DUDE."

Don't ever, ever search Youtube for "lancing a boil, ever.

IT'S A HORRENDOUS SONG SO SURE GO AHEAD. Michigan State went to great lengths to say that they had already pulled Jay Harris' scholarship before he opted to pursue a career in rap, and let it be known that Michigan State was firmly committed to this three-star recruit who had a waning interest in football. Like, REALLY into him, at least until he started smoking weed on camera. The song is horrendous, so he probably will be wildly successful.

MIKE WOULD PROBABLY JUST DESTROY A BIRTHDAY HAT. No, you cannot have your birthday party in the cage with Mike the Tiger. Yes, you may give him a hat, but he'll just destroy it.

ETC: Lo, we have an acting website for Tobias Fünke. On Sandwiches strenuously disagrees with the French and their opinion of Jack in The Box's burger. The Bowling Ball clearly needed to be armed in this situation.