BCS HATE SEX IS THE BEST SEX OF ALL

Share All sharing options for: THE TIM BRANDO SEX TAPE IS REAL(LY FAKE AND NOT AT ALL REAL)

Tim Brando has a sex tape. He totally said as much on Twitter yesterday. And with all rumored sex tapes, it just takes the right amount of money and competent distribution for it to see the light of day. But we at EDSBS don't have time for Timmy B and Vivid to hammer out all of the details, we need that gratification that only a Tim Brando sex tape can bring right now. Luckily, thanks to my many seedy Shreveport back channel connections (Thanks Independence Bowl!), I was able to procure an early rough draft chronicling Tim Brando's voracious sexual appetite. It's hot. It's steamy. And in the end, the iron isn't the only thing that is "unkind".

Any (Shreve)Port in a Storm: The Tim Brando Sex Tape

EXT. THE VERANDA OF THE BRANDO ESTATE - NIGHT, WITH LIGHTNING FLASHING OFF IN THE DISTANCE

Tim Brando, wearing nothing but his CBS sportcoat, lounges like an emperor on the patio chaise lounge, drinking a select Cabernet from his family's private vineyard. He casts his gaze to the heavens, unsettled by a sudden sense of loneliness yet optimistic about what escapades the evening might bring.

Suddenly, a knock at the door.

I wonder who that could be at this hour.

As rain begins to fall, Tim saunters from his position on the veranda and toward the interior of the house. He is either unable or unwilling to change from his present state of partial undress.

The knock repeats as Tim walks toward the front door.

Tim makes it to the door, trying to peer through the peep hole but unable to recognize the shadowy figure thanks to the veil of night.

But, I didn't order any pizza.

The order specified that there be "extra anchovies".

Well, Im not quite sure who would order such a thing,

but Im never one to turn down a free meal,

besides, a hot steamy slice in my mouth would be rather pleasant this eveni... 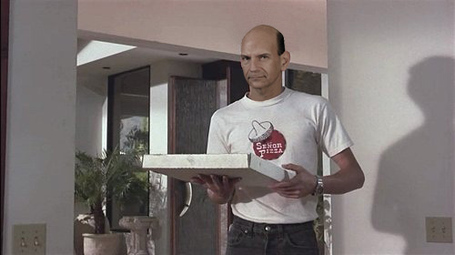 I've got an extra large for you, Mr. Brando.

Paul seems unphased, if not pleased, by Tim's wardrobe.

Well, my my. I'm not sure that I can handle all of that.

Well, you better, because I also brought some piping hot bread sticks...

Paul unzips his pants, to reveal an order of bread sticks. This seems like a strange place to keep bread sticks, Tim doesn't seem to mind.

Well, that is quite a meal you have there.

Why don't you come in and join me this fine evening.

Before he can object, Tim leads Paul into the den.

Tim sets the pizza and bread sticks down on the coffee table and leads Paul to the couch at the center of the room.

Can I get you something, a glass of Cab perhaps?

It's from my own personal vineyard, you know.

That'd be lovely, thank you.

Tim leaves to head to the wine cellar to fetch another bottle.

Tim meticulously peruses the wine until he finds the perfect bottle for the evening's newly arrived festivities.

With his choice in hand, he heads back into the den area.

Tim enters to find Paul, sprawled out on the couch, nude, and in full presentation.

Oh my, well aren't you just a little fly in my ointment.

Tim casts the bottle of Cabernet to the side, the bottle breaking against the hard tile floor.

Tim moves to the couch and begins to whisper undecipherable nothings about the downfall of the BCS system into Paul's ear.

You're different than the others, Tim.

When I'm with Nick, all he wants to do is talk about how bad the spread is

And unfortunately, Nick does run a version of the hurry up in other areas of his life.

Then get ready for three yards [raises eyebrows] and a cloud of lust.

[the sounds of passion]

[SPONSORED BY YELLAWOOD: WHEN YOU NEED IT HARD AND YOU NEED IT LONG, CALL ON THE OFFICIAL WOOD OF THE SOUTHEASTERN CONFERENCE, YELLAWOOD]