WELCOME BACK, YOU FUZZY HUSSY

Though it never went away in your heart, the Peach Bowl is coming back! These last seven years have been dark ones, pretending to love the Chick-fil-A Bowl even though we knew - we knew - something better was out there for us. Where will the future take us, Peach Bowl? Only time will tell, but, hopefully, it'll be just as sweet as our shared past:

1968. The first Peach Bowl, held at Grant Field and pitting Florida State against LSU. The Seminoles managed to lose this game 31-27 despite LSU turning the ball over five times, because LSU has always done LSU shit. A hypothetical Georgian conceived at this game would be turning 44 this year and is wondering if he can convince the driving range manager to put Neal Boortz on over the loudspeaker.

1971. After three games at Grant, the Peach Bowl moved to Atlanta-Fulton County Stadium, and hometown Georgia Tech promptly got its ass whooped by Mississippi. The weather was great! 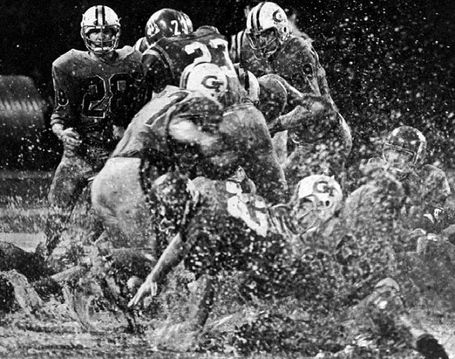 A hypothetical Georgia citizen conceived at this game would be 41 this year and is fine with getting on with this divorce because now no woman's going to give him shit about "sleep apnea" or whatever.

1974. Texas Tech 6, Vanderbilt 6. It's a terrible score for a terrible game, notable only because mere hours after it ended, Vandy head coach Steve Sloan announced he was leaving the school...to take the Texas Tech job. This was quite literally the most lateral move possible.

Also, someone is selling a torn ticket stub from this Peach Bowl for more than the combined score of the game.

A hypothetical Atlanta resident conceived at this game would turn 38 this year but would spend his whole birthday thinking about his bum knee while chasing a three year old through Gymboree.

1979. The records say Baylor won this game 24-18 over Clemson, but that's only part of this Peach Bowl legend. The real victor? 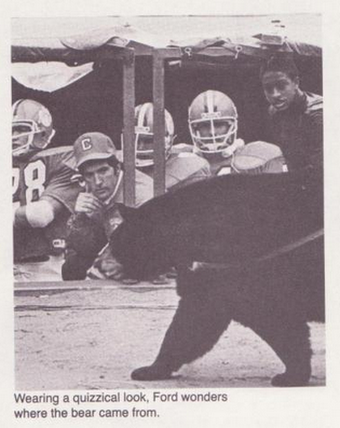 Danny Ford, who owed that bear $400 but never paid it. Danny Ford also slept with that bear's woman. Danny Ford is not sorry, because that bear was a neglectful partner.

The hypothetical Georgia homeowner conceived at this Peach Bowl would turn 33 this year. He is waking up in a car, realizing he is in the parking lot of Murder Kroger, confirming that he is not dead, and slowly realizing last night he committed murder.

1984. Virginia picked up its first bowl win in school history at this Peach Bowl, outscoring Purdue by 13 points in the second half to win by three. The loss dropped the Boilermakers to 7-5; they still finished second in the Big Ten, because narratives aren't just made up out of thin air, buddy.

A hypothetical DeKalb county voter conceived at this Peach Bowl turns 28 this year and you know what fuck this marketing job we're getting the band back together and taking it in a Mumford direction once I find a mandolin for sale on Craigslist.

1989. To Bulldog fans, this was an embarrassing Georgia collapse after Syracuse rallied from behind in the second half, converted a fourth and 5 on their last drive, and kicked the game-winning field goal with less than thirty seconds left. But to Ray Goff, it was something, much, much more magical - his first (and sadly, only) IMDB credit.

Our theoretical Georgian conceived at this Peach Bowl would be celebrating his 23rd birthday this year. He will spend his entire year in an inner tube - drinking, sleeping, golfing - and wearing a Dolly Parton t-shirt, despite having no idea who Dolly Parton is or if she's even alive.

The full range of Kentucky emotions is on display here: anticipation (the punter after pinning Clemson deep), self-loathing (the defense immediately giving up over fifty yards to eradicate that punt's utility), resilience (the interception), even greater levels of self-loathing (the subsequent fumble on the unnecessary runback), confusion (the bite on the pump fake before the final touchdown), and acceptance of one's own sad fate (Bill Curry's glasses).

The theoretical ATLien conceived at this Peach Bowl would turn 19 this year, and he has a lot of strong political opinions, like "women shouldn't be allowed to purchase a gun unless they're hot" and "it's not a crime to buy weed from someone else in youth group."

1996. The last Peach Bowl before Chick-fil-A became the top-billed sponsor was a defensive grind: Clemson 7, LSU 10. The quarterbacks in this game combined to throw for 229 yards on 41 attempts. LSU only went 2/12 on third down conversions. Nobody scored in the last thirty-four minutes of the game. It was a sad game, and a sadder way to usher the Peach Bowl into its temporary retirement.

The theoretical Georgia youth conceived at this game would turn 16 this year. He just sideswiped your car and he is not leaving a note, because if you don't have insurance it's not his problem you're poor.