YOU THINK YOU KNOW WHAT'S BEHIND THE NEW B1G DIVISIONS. YOU HAVE NO IDEA.

On the surface, moving the Big Ten to an East/West divisional setup would seem to be nothing more than a matter of sensible geography. The Central Time Zone teams all stay together, and new entrants Maryland and Rutgers get a slightly less strenuous travel outlook.

But nothing is ever on the surface with Jim Delany, and that's not just a veiled reference to the thirteen pizza delivery guys buried under his koi pond. (When he says half olive, half pepperoni, he means EXACTLY half.) 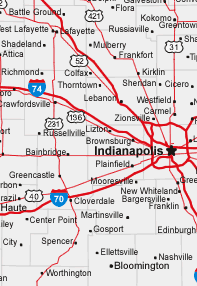 The dividing line for the new Big Ten is within Indiana (state motto: "The Crossroads of America.") Purdue is up in the top left corner in West Lafayette. Indiana University sits at the lower right, in Bloomington. These former divisional colleagues are now split, the space between them a narrow no man's land no longer of interest to journalists. But why would Jim Delany want to cut off this part of the state from the prying eyes of the outside world? Or, more, precisely, WHAT would Jim Delany want to keep hidden?

It's a small town - population of only about 10,000 as of the last census - but it's got a dangerous history. Greencastle's first mayor, E.R. Kercheval? A known Freemason, but look closer:

It couldn't be clearer. E.R. Kercheval (probably not his real name, if the man even existed) is a signal for a dark prophecy that the European powers of old will return to dominance by trapping (or "containing") the United States for good, with the doomsday symbolized by one of the Horsemen of the Apocalypse.

It doesn't end there. Famed Depression-era bank robber John Dillinger pulled off dozens of heists, but his biggest theft, by value, took place in...Greencastle. Dillinger made off with $74,782 in 1933 after robbing the Central National Bank of Greencastle. Just a random number? Or is it something more?

74 - Archie Griffin wins his first Heisman Trophy in 1974.
7 - The number of letters in "Outback."
82 - America comes face to face with the dangers of highly trained military veterans living amongst us in 1982's First Blood.

Greencastle is also a town with assets. Just two years ago, the town received a promise of $19 million in state funding over three years as part of the "Stellar Communities" project. But what is this money for? Could "Stellar Communities" be code for a secret program designed to develop an orbital missile platform?

This V-1 bomb - which sits right outside the courthouse in Greencastle - tells us all we need to know. 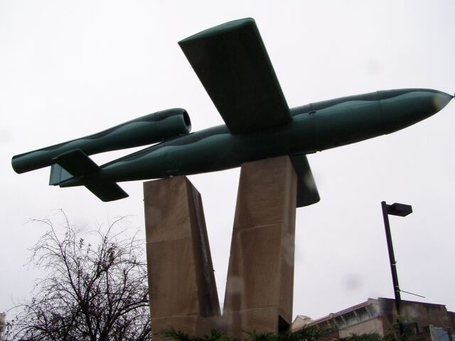 Put the puzzle pieces together and you'll see the truth. Jim Delany has manipulated the Big Ten and Indiana's state government as part of an underground project to develop a space-based weapon launched and controlled from Greencastle - the same city we're all suddenly not paying attention to anymore - in order to usher in a new Habsburg dynasty that will overthrown the American government.

Doubt me? Just wait until you're debating which Big Ten division is tougher: der Osten or der Westen.